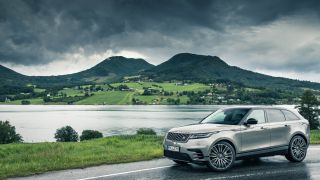 Despite the onslaught of premium car manufacturers muscling in on the lucrative SUV market, Range Rover is still the brand against which all others are judged, and with the arrival of the Velar the company hopes to cement this reputation even further.

The Velar slots into the range between the Range Rover Evoque and Range Rover Sport – and if you’re wondering about the name, it’s a nice nod to the brand’s heritage. You see, Velar was code-name used on the original, pre-production Range Rovers of the late 1960s (and for those whose Latin is a bit rusty, Velar is derived from the Latin word velaris, meaning ‘to cover’).

The original Range Rover became one of the defining cars of the last century thanks to its perfect marriage of luxury and technology, and the Velar looks to continue that ethos. To find out if it's succeeded, TechRadar hit the winding roads (and a ski slope) of Norway in one.

While it would have been all too easy to shrink the proportions of the Range Rover into a slightly more compact form factor, the Velar sports its own distinctive styling – and in our opinion Range Rover’s design team has got the look of the Velar pretty much spot-on.

Aided by little design cues like the flush-fitting door handles that deploy when you unlock the car, Matrix-Laser LED headlamps and copper-colored detailing, we were struck by how sleek and elegant the lines of the car looked when we caught sight of it for the first time. This will come down to taste, but we reckon it easily outshines the likes of the BMW X5 and Porsche Macan when it comes to looks.

This streamlined design ethos is carried through into the interior design of the Velar, with the dashboard looking like nothing we’ve seen before.

Out go the plethora of buttons and switches usually found on a central console to be replaced by two imposing 10-inch high-definition touchscreens supplied by Panasonic, which along with the two ‘floating’ Magic Ring rotary controls, dictate pretty much every interaction you have with the Velar.

The top screen tilts forward when you start the car, and provides access to the likes of the sat nav, stereo and phone connectivity, while the bottom screen offers additional controls for climate control, seat settings and driving modes and more. This is complemented by capacitive controls on the steering wheel and a 12.3-inch virtual cluster with four configurable modes.

How easy is it to get to grips with? Unless you’ve been living in a technology black hole for the last five years, you’ll be working your way round the Velar’s controls in no time. It’s really that intuitive to use, while you should be using it quite happily without the need to glance away from the road too. Oh, and did we mention the cool heads-up display with key driving info (including sat nav directions) that’s projected onto the front windscreen just above the steering wheel?

Aside from the wealth of technology on tap, the Velar is a very nice place to be. As you’d expect, the materials and finish are first-class, and even after having covered almost 200 miles in our first day of driving we still felt refreshed – although that could have just been the adrenaline kicking in after the hair-raising obstacle course Land Rover made us complete at the end of our drive.

The Velar is being offered with six engine options initially, all coming with an eight-speed automatic gearbox. There’s an entry-level 2.0-litre four-cylinder diesel unit available with either 178bhp and 237bhp power outputs, and a new 2.0-litre petrol engine with 247bhp and 296bhp variants. We drove the two V6 range-toppers: a 296bhp diesel (0-60mph in 6.1 seconds) and a supercharged 375bhp petrol engine (0-60mph in 5.3 seconds).

Both waft along effortlessly, with the automatic gearbox seamlessly shifting through the gears. As you’d expect, the petrol version delivers a more satisfying engine note and is just that bit quicker, but the diesel isn’t without its charms, and is incredibly refined too.

The Velar is Range Rover’s most road-orientated car to date, and it certainly felt very agile as we navigated the winding roads of Norway, with the steering delivering a pleasing weight and slickness. The ride was very smooth as well thanks to the Velar’s air suspension, with the car gliding over surface imperfections, while the grip from the all-wheel drive system was impressive.

For some reason, quite a few of the roads in Norway seem to be only a car-and-half wide, but what surprised us here though was that despite the Velar’s size (it’s 2.14m wide, 4.8m long and 1.66m high) it didn’t feel like a large car as we weaved through the various passing places.

With the Velar being so good on the road, you could be forgiven for thinking that the Velar’s off-road chops had been diluted, but nothing could be further from the truth. The Velar is dripping with off-road technology and quality engineering that will make other cars in this class look a little sheepish.

To prove the point, part of our route included a few off-road trails. And when we say off-road trails, we’re not talking about a slightly muddy road. With the ability to raise the ground clearance to 251mm, we tanked up deeply rutted and slippery tracks that would normally be impassable, following that the next day with a slightly nerve-racking jaunt up the side of a 1,000-meter ski slope.

With some parts of the track offering stunning views, and others sharp drops to the side, this is where the Velar’s body-mounted cameras came in handy, allowing us to see live feeds from above the front wheels, as well as in front of us, all displayed on the Velar’s touchscreen.

Once we’d used the clever hill descent driving mode to make our way down again, the perfect way to cool down the brakes was to drive through a river – and naturally the Velar was more than up to the task with its 650mm maximum wading depth.

The Velar is a stunning car, and it's impossible not to be impressed by this latest Range Rover. The dual touchscreens are a thing of wonder, and make the Velar's luxurious cabin one of the most technologically advanced out there. That's just a small part of the Velar's appeal though, with the assured handling and breathtaking off-road capabilities all cloaked in what has to be the most elegant SUV body we've seen.