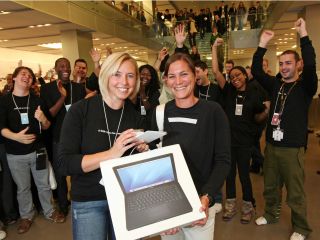 The 10 millionth visitor to Apple's Regent Street store was showered with gifts, including a MacBook laptop

Apple has celebrated the arrival of the 10 millionth visitor to its Regent Street store in London, by giving the 25-year-old a whole bag of Apple goodies including a MacBook, an iPod nano and One to One personal training membership.

The Regent Street store was the first Apple Store in Europe and was opened in November 2004. For the Mac faithful it's a bit like visiting Mecca - you almost feel compelled to go there, even if you don't buy anything!

Of course the sceptical would point out that the Apple Store would get lots of visitors, because of its location on one of London's prime shopping streets. We could also point out that the former Gizmondo store - which was located a few doors down - was always empty with staff and security guards outnumbering the actual number of shoppers.

The Regent Street store is just one of the 11 stores Apple now has in the UK. Worldwide Apple now has 179 stores, which have attracted 220 million visitors since the first one opened in May 2001.