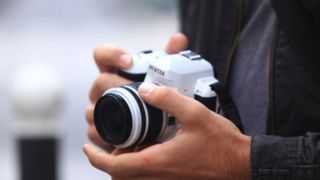 Is a new Pentax camera with a full-frame sensor coming at Photokina?

Rumours are suggesting a new 24 million pixel, ultra compact DSLR will be announced at Photokina 2012 in September.

Thought to be known as the K-3, suggested specs include a 24 million pixel sensor which is rumoured to be manufactured by Sony for its upcoming full-frame DSLT.

Other features are thought to be a 29 point AF sensor, 6fps continuous shooting, 1080p and 720p video recording at various frame rates and a Dual PRIME M processor.

It's thought that the camera will be officially unveiled at Photokina 2012, but not available for sale until next year.

One or two cameras?

Other rumours earlier in the week suggested that Pentax would be announcing a mirrorless full-frame camera, so it's not clear at the moment whether there will be two cameras or one device.

A rumoured tagline for the new cameras is "the world's most compact full frame", which could suggest a mirrorless option.