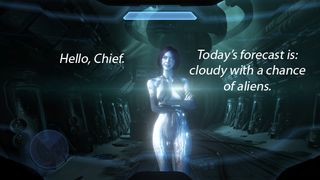 More mundane reports than Cortana is used to giving

Microsoft is reportedly planning to include a Siri-like personal assistant in the upcoming Windows Phone 8.1 update, and its codename should sound familiar to gamers.

According to ZDNet, Microsoft's virtual personal assistant is currently being called "Cortana" after the sexy purple artificial intelligence character in the popular game series Halo.

Cortana first popped up in relation to Windows Phone in June when an alleged screenshot from an early update build showed an app called "zCortana."

But the name started to appear once again this week, and sources looked to confirm that Cortana is indeed Microsoft's answer to Apple's Siri and Google Now.

Cortana will be more than just a voice command interface for Windows Phone, and like the Halo character will be able to learn and adapt, according to those sources.

And it seems Cortana will rely on Microsoft's "Satori" knowledge repository - the same bank behind Bing.

The virtual assistant may have been hinted at previously by Microsoft CEO Steve Ballmer, who mentioned "a service-enabled shell" for Windows Phone in a July memo posted to the company's news center.

"Our UI will be deeply personalized, based on the advanced, almost magical, intelligence in our cloud that learns more and more over time about people and the world," Ballmer wrote.

"Our shell will natively support all of our essential services, and will be great at responding seamlessly to what people ask for, and even anticipating what they need before they ask for it."

To top it off, The Verge today published screenshots it claimed are from an early test version of the Windows Phone Cortana personal assistant.

The images appear to show that Cortana can pull together weather, calendar events, notifications, location information, controls for Bluetooth devices and more.

The images also show some of the settings and customizable "rules" for Cortana.

Even if this really is a glimpse at Microsoft's take on Siri, the interface and UI will doubtless have changed by the time Cortana actually appears, likely with Windows Phone 8.1.

That substantial Windows Phone update could come as late as next year.