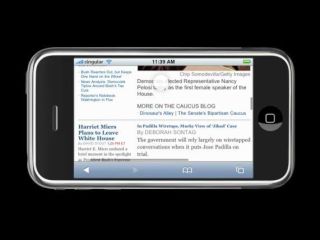 Apple is raising the bar for mobile phone manufacturers. They won't be pleased.

Apple has taken a wrecking ball to the mobile phone industry with the launch of its iPhone . It has smashed our preconceptions of what a mobile phone can be, while also delivering a hammer blow to iPod rivals like Sony Ericsson's Walkmans, Motorola's new Motomusic handsets and the Nokia N-Series.

The iPhone does it all, enabling you to watch movies and listen to music, surf HTML-rich content from the web and, of course, make phone calls in a way that manages to be both revolutionary and incredibly simple at the same time. Apple has effectively stolen Philips' brand marketing message and delivered 'relevant innovation'. Mobile phones will never be the same again.

The biggest draw has to be that slick new user interface. It delivers the full power of Mac OS X with a multi-touch display that makes it a breeze to navigate through the iPhone's many features. The phone doesn't need a keyboard, doesn't need a stylus, you just tap the screen with your finger and it just works. You can even resize images in iPhoto using your finger and thumb.

The technology is so promising that you can easily imagine Apple applying it to their laptops. Team a multi-touch OLED display with SanDisk's new 32GB flash memory drive and Apple could deliver the ultimate in ultra-thin, long battery life notebooks, or even a tablet PC.

The iPhone significantly ups the ante when it comes to mobile device interfaces too. It promises to out-do Nokia's Symbian OS, Microsoft's Windows Mobile and Palm's OS in terms of out right ease of use - always an Apple mantra - and is likely to find fans among users who are frustrated by the cryptic navigation systems found on almost all mobile phones.

Unusually for Apple, the iPhone ticks almost every item on a gadget-boy's wish-list with Wi-Fi, Bluetooth headphones, quad-band GSM and GPRS (EDGE), push-email (like a Blackberry) and integration with a wide range of mobile email services.

The only possible criticisms that you can level at it at face-value are the lack of 3G integration, so-so battery life and a steep $499-$599 asking price that's going to make the iPod muggers even keener to have a crack at you than they are already.

Can Apple justify it claim to have reinvented the phone? On the evidence we've seen so far yes. The question is now how many the company can actually shift before the competition starts to fight back.