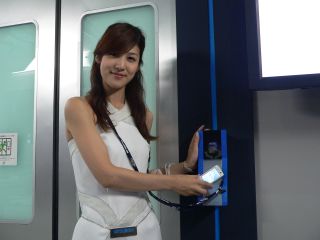 Orange and T-Mobile, under the joint banner of Everything Everywhere, will be rolling out NFC-enabled SIM cards this year for mobile payments in association with Barclaycard.

Customers will be able to use their mobile phone to simply swipe and pay for items at a range of outlets, which already number over 40,000, from Q2 2011.

This will include Pret a Manger, EAT, Little Chef, McDonalds and Co-Op, and Everything Everywhere has confirmed to TechRadar that more outlets are likely to be announced by the time the technology rolls out.

No touching, can't get mad

A spokesperson said: "Outside of payments, we also support the vision of mobile contactless lifestyle services.

"We see a future where a consumer can use the mobile phone to spend on the high street, get discounts and redeem in store as well as use the phone as a ticket for the bus, train or access to a sports or music venue."

As the payment system is SIM based, customers won't need to have a high end device like the Google Nexus S, although the technology will be handset dependent.

TechRadar was also told a range of devices from prominent names will be rolled out over the coming months to support the technology used.

Orange has long been a staunch supporter of getting NFC technology onto the high street, and it's not surprise it's finally doing so under the Everything Everywhere brand, which will mean more customers can get behind the scheme.

The finished plans for the roll out haven't been finalised as yet, so expect to hear more about how 2011 will be the year contactless payments comes of age in the near future.