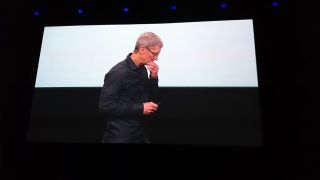 You seem like a cool dude, Tim. Why can't your company be?

The company's new iPhone and iPhone 5C announcement was as boring and uninspired as they come. It was the same song, punctuated by droning commentary from a taped Jony Ive and a visit from Elvis Costello.

Apple's decision not to live stream its iPhone keynote was particularly puzzling. The lack of an immediate, "I'm there" connection to these new major products that Apple is taking into the holiday season (primetime in the consumer tech world) was off-putting.

It stands in direct contrast – and perfectly highlights – a key difference between the two kings of the mobile operating system, iOS and Android.

Android is (all together now) open, inclusive and growing globally at breakneck speed. iOS is far less open, plenty would say difficult, exclusive and stalling in many markets.

Apple's always had an aloofness about it, an attitude that's kept it interesting from the sheer fact that no one is quite sure what's going on behind its IL doors.

Not in Apple's innermost circle? Wait with bated breath like the rest of the world to see what we have to wow you.

There's a certain cache that comes with that, but increasingly that approach is not only out of touch but alienating.

Even during its most recent event – the announcement of Android 4.3 and the new Nexus 7 – Google kept it intimate but still streamed it to the masses. The information was immediate, unfiltered and ready for consumer digestion.

Yesterday, those not sitting in Apple's conference room or at a Berlin store or locations in Tokyo or Beijing – where Apple reportedly just replayed the Cupertino event - were left to find their information elsewhere. Not that there aren't plenty of news resources (shameless TechRadar plug) and Twitter to glean what's going on at Apple, but doesn't that do even more to take message control away from the company?

Apple operates servers galore and more technical resources than I can count, and yet it couldn't be bothered to throw up a video on its Events page? It couldn't create a stream to bring information directly to customers, the people who are going to buy these products and will keep Apple's coffers and investors fat and happy?

Message control is hugely important to Apple, and perhaps there were copyright issues or embedding concerns that it factored in its decision not to broadcast the keynote.

Mitigating factors and control freak-ness aside, there are a zillion avenues for people to get the latest, so why not eliminate the question of authenticity, look square in the camera and say, "Hey consumers of the world, here are our new iPhones. What do you think?"

In creating a limited, exclusive viewing experience, Apple isn't only creating a self-imposed mystique around its product launches. It's creating a barrier, a wall between it and consumers.

Perhaps Apple was trying to capture the allure stolen by the infinite leaks it can't seem (or isn't trying) to stymie.

I can't blame Apple entirely for much of the air being sucked out of yesterday's event thanks to slips, but I do point a finger at the narrow scope through which it insists it must be viewed.

My colleague John McCann astutely wrote about the glimmer of innovation we see in the iPhone 5S' Touch ID, but argued "Apple is still plugging a handset design which arrived over three years ago...it's pretty poor it couldn't come up with anything more than an updated camera and quicker processor."

I couldn't agree more. Apple no longer warrants the exclusiveness it imposes.

Other phone makers are still up and coming compared to Cupertino, and therefore have a stake in being accessible. However, in a quickly saturating market, being closed off isn't going to do Apple any favors in winning more customers. Instead, it will look as lame as it did yesterday, where it peddled a tiresome attitude over real innovation.

With a new iPad announcement expected in October, I hope for its own sake Apple decides to open up its virtual doors. Even more so, I hope it delivers something that at least starts to justify its aloofness. Because that approach is rapidly wearing thin.