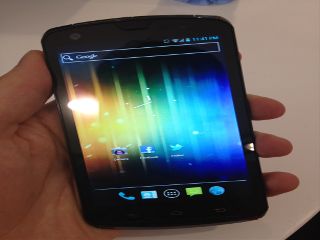 While visiting Fujitsu at Mobile World Congress, TechRadar was treated to a hand-on review of a product so new, that Fujitsu hasn't even given it a name yet.

The Fujitsu quad-core, as imaginatively dubbed by the Japanese electronics giant, offers the power we've seen on devices such as the Huawei Ascend D1 and the HTC One X, and adds a whopping 13.1MP camera to boot.

See the quad-core beast in action as we run through the UI and gaming at MWC:

While there may be some tweaks to the final finish of the quad-core, we were immediately dubious about the size of the build. It's quite a chunky looking handset, but there's a lot of power packed away.

The quad-core power comes thanks to an nVidia Tegra 3 processor, which drives this Ice Cream Sandwich device, keeping it snappy and responsive as we browsed the operating system.

There's a pin-sharp 1280 x 720 screen, which looked sharp, and vibrant, and when we played games the visual effects were stunning. Critics will say that on such a high-end smartphone the lack of an AMOLED display is a loss, but with such a high quality LCD display, Fujitsu gets away with it.

The HD resolution screen enabled us to view web pages in full, and we could easily zoom into the right areas with smooth pinches and zooms, and we were impressed by fast rendering of images and text, thanks to that quad-core processor.

At present the quad-core has three physical buttons under the screen, but our source at Fujitsu did warn that these might become soft keys for the European release.

One of the big talking points is going to be that 13.1 MP camera, and Fujitsu were keen to point out the wealth of technology packed into the snapper. However, we weren't that impressed.

It's still early days, and there's plenty of work still to be done, but the camera was horrendously slow, and seemed to take an age to focus and capture the image. The results were sharp, but we worry that if the camera was that slow in bright light, how badly could it perform in low-light conditions.

Update: Fujitsu has since informed us that the phone was only running at 3MP with unfinished software, so we'll wait for our full review to give the camera a proper once over.

The Fujitsu quad-core launches in Japan in the summer and is set for a European launch later in the year.