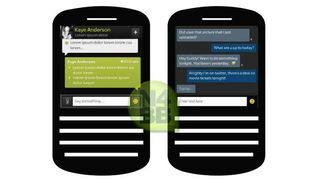 Some pictures of what is supposedly BlackBerry Messenger for BB10 have leaked, putting the battery-saving power of a black background to good use.

Annotations to the pictures, probably from some kind of internal slide show (if they're legit), explain that the darker colours and optimisation for the OLED display will decrease power consumption "approx 75%".

We're not wholly convinced that this is a final-design presentation or anything – the 'slides' look a little scrappy and the grammar isn't perfect, so it could just be a concept illustrating the possible effects of a darker colour theme.

But with BBM such a key selling point for many BlackBerry users, we appreciate any effort going into reducing its effect on energy consumption.

RIM revealed that the first BB10 handset to launch will be a full touchscreen device, forgoing the popular BlackBerry QWERTY keyboard – sadly there's still no word on exactly when that will be.

From N4BB via BGR