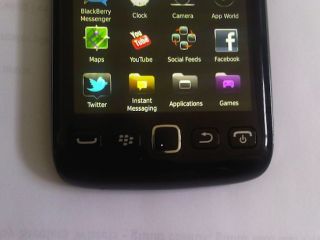 The BlackBerry Touch 9860 has spent as much time posing for photos and videos as most phones that have actually been released, with yet another photo shoot turning up online.

RIM's first full-touch BlackBerry since the Storm range, the Touch 9860 features an optical trackpad and four physical navigation buttons along with a fairly large-looking touchscreen.

We'd fully expect the BlackBerry Touch 9860 to come with the newly revealed BlackBerry OS 7.0, and from the look of the redesigned icons in the leaked image, we'd be right.

That means we could also reasonably expect a high-resolution capacitive touchscreen and a 1.2Ghz processor, as well as juicy extras like NFC.

Of course, we won't know for sure until RIM gets around to launching the BlackBerry Touch 9860; let's hope it gets its first official outing soon.

Via CrackBerry and PocketNow