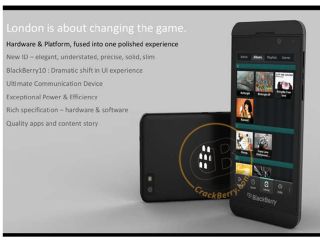 In the absence of any actual handset launches from RIM, we'll have to make do with yet another BlackBerry 10 rumour – this time in the form of pictures of the BlackBerry London.

The handset renders, which aren't actual product photographs, look nothing like the leaked photos of the London published in early January.

These new images show a long thin handset with a narrow screen looking nothing like your average BlackBerry phone.

According to the bullet-points joining the images on the leaked RIM slide, "London is about changing the game."

Apparently the game is about to feature hard- and software fused into one polished experience and will morph into a "quality apps and content story" which would be a bit of a change for RIM (zing).

The slide also promises "excpectional" power and efficiency and rich specification – previous rumours peg the BlackBerry London as a 1.5GHz dual-core handset with 16GB of internal storage and 1GB of memory.

Apparently RIM has the UK in mind for the London, with two other handsets in the works for the US (BlackBerry Laguna and BlackBerry Lisbon), although there's still no hint of a UK release date for the BlackBerry 10 handset.

But, if new RIM CEO Thorston Heins has anything to do with it (and you'd hope that he would), BlackBerry 10 handsets will land before the year is out.