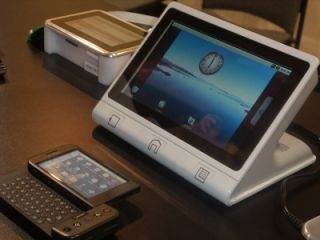 Demonstrating just how easy it is to port Google's Android OS onto devices other than mobile phones, a new device from Touch Revolution, shown at CES 2009, has finally broken cover.

The device comes in 4.3in, 7.5in and 10in screen sizes, and although currently in the prototype stage can show off Android at larger screen sizes.

Although the 'traditional' Android screen, with the desert in the background, was present, Touch Revolution skinned extra features on top, allowing the device to be turned into a home communication device, with a set of four large icons for quick links.

The prototyped device, which TechRadar was told would be similar to final version brought out later this year, had three physical buttons at the bottom to navigate back and forth through the device, giving easy access to the Android home screen.

It's both Wi-Fi and Bluetooth enabled with SD card storage, and comes as a white label device, with telecommunications companies allowed to rebrand and redesign the software inside to cater for their own needs.

TechRadar was also told that building the extra skins and widgets was so easy that it took only a day to customise... meaning that it could be used by a number of customers in hundreds of different ways.

The screen is also multi-touch, and while Android currently doesn't support this functionality Touch Revolution told us that both they and Google are working on getting it into the OS... so watch this space.

If you're interested in getting one of these devices, the bad news is they'll probably be limited to the US only... but if you make the trip over to the States in Autumn then you'll be able to pick one up.