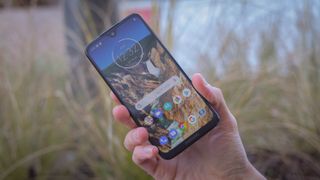 Based on a new image from Evleaks (a reliable leaker), Motorola is seemingly preparing a notch-less handset that looks to have an almost all-screen front.

There's still a bit of a chin below the screen that allows for the Motorola logo to be there looking out at you, but there's no cut-out or notch to provide room for a selfie camera.

So where is the selfie camera? It may be that Motorola has adopted the pop-up camera we've seen on devices like the Vivo Nex and OnePlus 7 Pro to allow for even more display without a notch.

The interesting thing is that Evleaks isn't certain what device is pictured, and we're not too sure either.

It's unlikely to be the previously rumored Motorola One Zoom, as that is expected to sport the same sort of notch design as we saw on the Moto G7 range.

That may mean this is an early glimpse at the Moto G8, which we don't expect to see until 2020.

This may turn out to be a totally new device though that's not part of any existing range, so we could hear about a new handset from Motorola in the near future that comes with this new notch-less design. For now, we'll have to wait and see.