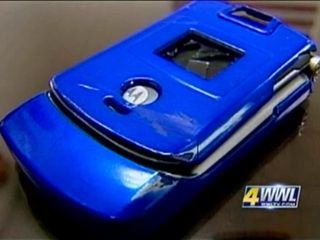 The life saving phone... we don't know if it still works

A man was happily trundling along in his lawnmower, minding his own business, when he said he felt like he had been punched in the chest, right at the point where he had clipped his Motorola RAZR.

He took off the phone to inspect it for damage, thinking a piece of debris had flicked up from his 'mower, and lo and behold a bullet fell into his lap!

The phone clipped to his chest had prevented him taking a shot to the heart, with the bullet apparently travelling a quarter of a mile from a nearby forest.

Perhaps Moto knew this was a possibility when designing its latest handsets, as those coming out now seem decidedly chunkier than the RAZR, which was ironically so popular due to its slim form.

You can watch the news programme detailing the lucky escape, including such brilliant moments as a news reporter standing in a 'makeshift recreational area' in the nearby forest where 'gunshots were often heard coming from this area'.

We just hope he's got phones clipped safely over his vital organs too...