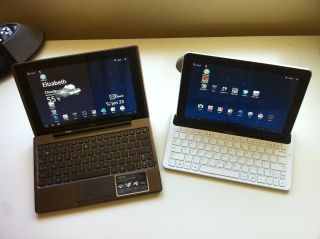 There can't be much doubt that the iPad 2 is currently the king of all tablets.

It has its flaws, its drawbacks and many a detractor, but it still offers the most slick tablet experience out there.

But that doesn't mean there aren't some viable alternatives out there, oh no.

The trick in comparing the Samsung and Asus is that they use remarkably similar internal components -- the same NVIDIA Tegra 2 dual-core 1GHz processor, 16GB of internal storage, 1GB of high-speed DDR2 RAM, 1280x800 10.1-inch touchscreen, Android 3.1 OS, front and rear cameras, Bluetooth 2.1, 802.11b/g/n for Wi-Fi (but no built-in 3G), and the typical gyro and accelerometer sensors.

To pick the winner, we've mostly evaluated the differences in physicality, performance and real-world functionality.

We should mention that there is one spec that is uncontested: the Asus Transformer beats the Samsung on price. The Transformer 16GB costs £379 or £429 with the keyboard; we don't know the exact price of the Samsung Tab 10.1 16GB in the UK yet, but the US price is $100 higher than the Asus at $499.

Evaluating the differences between the two tablets starts with the 10.1-inch screen -- that's what you see when you first power-up the machine, you will use it for controlling apps and playing movies with finger swipes and presses, and the screen tends to cause the most battery drain.

There's no question the Tab 10.1 is brighter than the Asus Transformer, especially with the brightness setting cranked all the way up. Yet, the Tab 10.1 is also more colorful.

Viewing the exact same Harry Potter and the Deathly Hallows trailer side by side, Potter's mum - with her red hair and rosy cheeks - popped on the screen with a much richer colour treatment. On the Transformer, the same clip looked gray and dark (and the scene is not supposed to be ominous, unlike the remainder of the film).

In testing a handful of other videos and photos, the Samsung looked brighter, clearer, and more colorful in everything from a Bridesmaids trailer to our own video captures and photos with the device. Games tended to pop off the screen in a more colorful way on the Samsung.

Oddly, the Transformer, per the specs, should have the superior screen. The Samsung uses TFT technology, but the Transformer uses the IPS technology that is supposed to be better for side-viewing. In reality, both tablets looked about the same at an angle.

Performance on an Android tablet is partly based on the processor and RAM allotment, which are the same on both tablets. And, in repeated speed tests with the same group of apps - browser, photo gallery, Gmail, Google Earth, and several others - the results were roughly the same.

Using the AnTutu benchmark utility, the Samsung consistently scored fractionally lower than the Asus. In our tests, though, we didn't notice that any app worked remarkably faster on the Transformer.

Interestingly, we saw a few differences when testing games. For example, Pinball HD is designed specifically for Tegra 2 tablets. On both models, in a side-by-side test, the Asus Transformer operated a hair faster. Shoot a ball at the same time, and it will careen around a bit faster. In the game RipTide GP, which is designed more for Android smartphones but runs in full-screen on a tablet, the game looked a hair smoother on the Asus especially when there were several opponents on the screen at once.

In terms of video playback, there was no comparison: the Asus Transformer crunched the pixels faster. For starters, movies at all quality levels played smoother. More importantly, 1080p trailers – including one for Cars 2 and another for Bridesmaids, both formatted for 1080p – played smoothly without any problems.

The movie Fair Game, which we have used to test just about every major tablet, also played smoothly on the Asus Transformer. The Samsung Galaxy Tab 10.1 worked okay for videos. Fair Game played smoothly. However, the Tab 10.1 did not play the Cars 2 or Bridesmaids trailers. And, on the video we shot with both tablets showing a Camaro SS, the Samsung 720p video played choppy.

Incidentally, this is one differentiator between both the Samsung and Asus tabs and the Motorola Xoom, which still has problems playing HD movies smoothly.

Another obvious difference between the two tablets has to do with portability. The Samsung Tab is much lighter, at 565-grams compared to the 680-gram weight of the Transformer. To get a sense for the difference, grab about 45 pennies -- that's roughly 115 grams.

The Asus is also a bit bulkier than the Galaxy Tab 10.1, but not as hefty as the Acer Iconia A500.

There's a wide bezel on the Transformer that's a slight throwback to the days of a Tablet PC slate. Some might prefer the edging to get a better grasp, but the Samsung bezel does not stick out on the sides as much.

The Galaxy Tab 10.1, measuring 8.63mm in thickness, beats the iPad 2 by a hair. The Asus Transformer is 12.98 mm thick, which is most noticeable when you lay the two tablets next to each other.The Asus does have one advantage - the thicker bezel helps with portability because you can get a better grip in a hurry. The snake-skin pattern on the back of the device also helps.

In the end, though, the Samsung offers better portability. When you pick up one and use the other in succession, you find that the Samsung affords a bit of relief that will come in handy in daily use at home and at the office.

And, the "transformer" angle is a bit of a marketing pitch. The Asus does clip into a keyboard, and it is the only tab keyboard we've tested recently that has a mouse pad that works with the Android OS. The Asus keyboard has two USB ports and a standard SD card slot, in addition to a 30-pin port for charging. The keyboard dock itself takes a charge and can then charge your Eee Pad - expanding its battery life up to around 16 hours.

Since the devices use the same Android 3.1 operating system, the usability comparison comes down to the extra software and UI enhancements on offer. With the Asus Transformer, there's no contest.

The Transformer comes with a slightly customized UI that shows a weather widget on the home screen. The device comes with a few extra wallpapers (both "live" versions and static). More importantly, if usability is partly a function of extra apps include (e.g., you can do more with extra apps), the Asus is also clearly superior. The device comes with MyNet DLNA streaming service, which you can use to send and receive content stored on a set-top box like the Xbox 360 or on a computer. Asus also includes Polaris Office which we've also seen on a few other Android tablets.

The Samsung Galaxy Tab is somewhat barebones. Essentially, Samsung has not added any extra UI components, or any extra apps, but has announced they will make these customizations soon. A future update will include a Samsung UI enhancement that includes new widgets. The AllShare streaming client will match what you can do on with MyNet on the Asus. And, we expect a few other add-ons.

However, for now, those are promises. The Asus Transformer includes UI extras now on the device. And, it is outfitted with more features – including extra USB ports and an SD slot on the keyboard dock.

We're assuming that if you buy the transformer, you'll also be getting the keyboad dock. The combination of the slick touchscreen interface with with the convenience of a physical keyboard make the Asus a very compelling option.

Battery-life claims with both tablets push nine hours, but that depends greatly on how you use the device. The Asus claim of 9.5 hours is reached by playing a 720p video continually at 60 bits of screen brightness. However, here is the reality of using both of these devices for a week: they last about the same amount of time. If you play videos, connect to Wi-Fi continually, check e-mail, and keep the screen at a reasonably high brightness, both devices lasted about 5 hours of constant use during the day. When we only used them occasionally during the day, both lasted about 10 hours.

However, with the extra 6 hours of battery juice hiding away in the Transformer's super keyboard, the Asus Takes it.

For storage, the available 16GB of internal memory on both tablets is adequate for daily use. You can store a handful of videos, hundreds of audio files, and install dozens of apps. The Asus Tranformer, however, has a microSD slot for adding more storage. The Asus keyboard dock also has a standard SD slot, whereas the Samsung dock has no extra ports.

With the built-in camera on both devices, the megapixel rating does not tell the whole story. And, it is a complicated story anyway. The Asus has a better rear cam at 5 megapixels, but a weaker front camera at 1.2 megapixels. The Samsung Tab 10.1 has a 3 megapixel rear cam, but a 2 megapixel front cam.

That said, the photos we took on the Samsung Tab 10.1 looked better. Compare the colour quality of the Chevy Camaro SS we photographed: in the Samsung shot, the colours look brighter and clearer. With the Asus, the shots look a bit dull, colourless, and not as appealing. Yet, both shots were taken within 30 seconds of each other in the same position at the same angle.

Both tablets offer similar features for controlling picture quality, effects, and scenes. It's also worth mentioning that neither tablet works that well for taking photos or shooting videos because of how hard it is to get a good grasp of the tablet, hold it steady and get a good shot

In the end, the Samsung gets a slight nod for camera quality and color accuracy. It is also a hair easier to use because the device is thinner and more portable for taking photos and shooting video.

So, for those keeping track, this means the Asus Transformer and Samsung Galaxy Tab 10.1 in a dead heat so far. The Asus wins on performance (mostly for playing smooth videos), usability (because of the extra ports and better dock), and storage (because of the SD card slot). The Samsung wins on screen quality (brightness and clarity), portability (lighter and thinner), and the built-in camera (for quality and accuracy). You might think, well: flip a coin and they are both contenders against the iPad 2.

Yet, one clear overall winner emerged. At a 8.63mm thickness and 565 grams, the Samsung Galaxy Tab 10.1 is not only lighter and thinner than the Asus Transformer, but also beats the iPad 2 for portability.

When you are ready to sit back and relax with a movie, catch up on your Gmail, or browse the Web, the Samsung presents a more ideal experience than the Transformer. There are scenarios where the Transformer is the better tablet, especially for expandability. But the bright and clear screen and great portability of the Samsung Galaxy Tab 10.1 makes it our overall Android tablet pick.