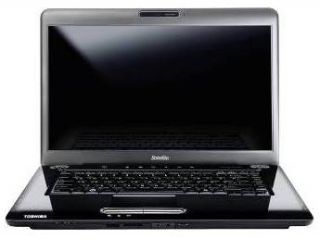 Toshiba has announced a new member to its burgeoning Satellite range of laptops, the Satellite A350.

It's the first 16-inch laptop to be released by Toshiba, with the added bonus that it features a 16:9 widescreen display.

And popping the widescreen aspect ratio onto a laptop can only mean one thing – it's built with movie watching in mind.

The laptop's HD resolution of 1366x768 means that you can view films in HD clarity.

Unfortunately, the lack of a Blu-ray drive means your HD movie watching will be limited to what you can download from the internet.

Aside from the wide-aspect screen, the laptop comes equipped with a 2.10GHz an AMD Turion Ultra Dual Core ZM-80 (at the highest spec), 4GB DDR2 RAM, a 320GB hard drive (again at the highest spec) and some integrated Stereo Harmon Kardon speakers.

Connectivity comes in the form of three USB 2.0 ports, which can be used to charge your devices even in Sleep mode, and an HDMI connection. You also get a 1.3MP web camera that will handily recognise your face.

The Satellite A350 comes in cosmic black and is available now from £529.