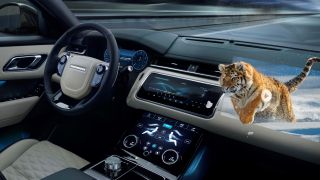 Jaguar Land Rover is creating in-car technology that will project 3D images in your line of sight.

The technology would be used to project augmented reality directions and warnings into your field of view, avoiding the need to take your eyes off the road to check the next turn while giving you early notice of oncoming obstacles.

When vehicles become fully autonomous, JLR says the system could transform a car into a mobile cinema, projecting 3D movies to keep you occupied while it whisks you to your destination.

Details of the technology itself are scarce so far, but the company claims the system will work without the need for glasses (definitely a benefit for driving), and will track head and eye movements to ensure visuals remain in your line of sight.

Are you not entertained?

JLR isn't the only company conceiving ways to keep us entertained once cars are able to roam the streets on their own. Tesla is busy adding games and apps that will keep drivers busy while their cars are charging, and will eventually provide entertainment on the move as well.

Audi, meanwhile, is developing an in-car 3D platform called Holoride, which allows passengers to enjoy a gaming experience that factors in the car's movements. This should help combat motion sickness, which could be a serious problem for in-car entertainment.

JLR doesn't make any specific references to motion sickness, but seems confident that it's cracked in-car VR. "In a fully autonomous future, the 3D displays would offer users a personalised experience and allow ride-sharers to independently select their own infotainment," the company said in a press release.

"Several passengers sharing a journey would be able to enjoy their own choice of media – including journey details, points of interest or movies – and optimized for where they are sat."