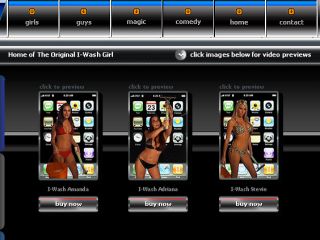 A woman is asking for men who 'won' her in an internet sex auction to contact her after she fell pregnant. Turns out she didn't know the real names of the men she met, and has asked the German courts to intervene. They agreed that the child has the right to know its father's identity and have forced the website they used to reveal all. The potential fathers now have to decide whether to take a voluntary blood test, or be compelled to do so.

Over the border in Poland a 42-year-old woman has had the opposite problem. Hanna Wozniak has been so desperate for some up 'n' under that she's phoned her local council, the army and the emergency services over 700 times. She's even threatened to start a fire so she can get some men with big hoses around.

Still the women literally don't have it (at) all their own way. Pay a visit to Big Brain Studios and you can choose a bikini-clad I-Wash Girl to come and clean the screen on the inside of your iPhone. The mind boggles. As does a lot else.

Over at Yahoo, Jerry Yang has been continuing to resist Microsoft CEO Steve Ballmer's advances, but now Ballmer's getting aggressive. In a civilized world, someone would step in and save the poor, defenceless Yang, but no-one not even Rupert Murdoch's News Corp seems to wants to come to his rescue.

Spot the flaw in this plan

Back in the land of make believe, the Japanese have come up with an MP3 player that makes you more attractive to members of the opposite sex. The 128MB Mpion comes with a built-in ioniser that opens up the pores in your face and rids them of the over-active hormones, excess chip fat and drugs that are the biological make-up of the average teen

Still that's not as icky as the heart-shaped Newman MP3 player, which splits in two so you can give one half to your other half.

Be careful the next time you speak to them on the phone though, as they may be using a KTF mobile with built-in ' love detector' that uses sound analysis technology to measure the amount of passion in your voice.

And finally here's someone who's so not in love they think the object of their derision needs to take drastic action:

"The further in I got, the worse my opinion of the company was. The clutter you experience on the user end is the product of clutter internally. If it weren't cruel and a danger to the economy, I'd suggest Microsoft fire about 40,000 people."