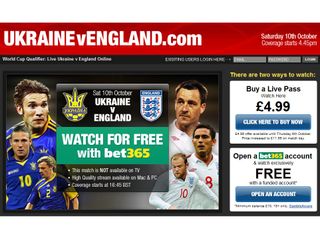 Football on the web divides opinion

Britain's largest ever live pay-to-view internet event happened this weekend, with England Vs Ukraine only available to watch online and in selected Odeon cinemas.

The outcome of the match, which England eventually went on to lose 1-0, was not significant to next year's World Cup for England at least, the way it was shown could be significant to how future football games are seen.

Making it web-only showed that more professional games may not be played out in front of television screens but computer ones.

Industry opinion is divided on just how significant the web event was. Unsurprisingly, the most vocal about its success were the providers of the internet stream – media group Perform – who celebrated the fact that there were "no technical issues" and called the game a "pioneering broadcast".

While exact figures are hard to come by, Perform believes around 500,000 people watched the match – including those who watched it through the British Forces Broadcasting Service (BFBS), who screened the game free for troops.

Compare this with the 8 million plus people who watched England's qualifier against Croatia, which was shown back in September on ITV, and there is a significant drop-off in viewing figures.

It has to be noted that the game against Croatia was a crucial one, and was shown on ITV for free, but it does make for interesting comparison if we are to believe that Saturday's game finally made IPTV mainstream in the UK.

No matter what the size of viewing audience, Suranga Chandratillake, CEO and founder of blinkx, believes the online match held great significance.

"The England Vs the Ukraine match this weekend was a watershed moment for online television," he explained.

"Where we used to turn to the Web for 10 second clips of dramatic chipmunks and skateboarding dogs, half a million people tuned in on Saturday to watch the England team compete in a premier sporting event. It was a glimpse into the future of TV, heralding profound changes in the media ecosystem of broadcasters, content owners and audiences."

Alex Lane, Editor of What Satellite and Digital TV, isn't so sure, telling TechRadar: "Less than half a million watching an England World Cup qualifier – even if it's not a crucial one – seems like an own goal.

"It just goes to show that money is far more important to the rights holders than the fans or the sport itself. It would have been a watershed moment if they'd sold it to platforms and venues that football fans want to use, like Xbox, PlayStation and pubs."

Regardless of the games impact, Blinkx's Chandratillake feels this is just the beginning for online football watching, believing that there's technology to come which will make viewing matches on the web much more enjoyable:

"Broadcasting the match over the internet was just the first step – imagine fusing that game with the interactive power of the web so that you had a top notch TV experience that was actually interactive and linked to the universe of information on the Web?"

He continues: "With a single click, you could get Wayne Rooney's history and stats, review key plays, select the commentator of your choice, and interact live with other fans all over the world. Whether you watch it on your laptop, or on the flat screen in your living room, this is the future – and it's TV on steroids."

The future of IPTV on the web may well be TV on steroids, but the present situation is a little different.

Gareth Beavis, News Writer at TechRadar, witnessed the match at Odeon's flagship cinema in Leicester Square, and was underwhelmed with the experience: "The cinema at Leicester square was only one fifth full at the most, which led to a pretty stilted atmosphere," he noted.

Beavis also believed the price may have been an issue, with the Odeon charging up to £12 for a ticket: "I think if the price had been lowered (and it was a more crucial game) it may have been easier to pack it out - as it was the few supporters singing seemed a bit half-hearted."

As for the picture quality of the game, Beavis commented: "The quality of the feed was good, although the overall production was far below a 'normal' England match - the punditry was poor, the commentating terrible at times and the editing of replays often rolled over a crucial point in the match.

"The big screen experience is great for football, but you feel that cinemas could do with being a bit more supporter-friendly when showing these big games."

If there are to be more professional football matches to be played out online, then it seems that presentation as much as technology is key to making them work.

ITV, the BBC and Sky Sports have a long history of bringing (to the most part) quality punditry and professional polish to even the most mundane football game. Perform managed to successfully bring the web feed to us, but it seems there's a long way to go before it can match the big broadcasters when it comes to bringing the spirit of the game.