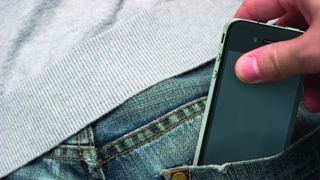 If you think selfie sticks are annoying because tourists keep waving them about in your face, then that's the least of your problems.

According to reformed criminal Richard Taylor, those very same selfie sticks are one of the top ways thieves get access to all of the valuables you leave lying around your house, not to mention making yourself a target out on the street.

We had the chance to interview Taylor at the launch of new insurance app Back Me Up and grilled him about the theft-friendly things people do with their valuable gear, the top tricks for nicking your stuff beyond the selfie stick, and just exactly how thieves go about getting rid of the gear they’ve stolen.

Here are a few quick tips on what we can all do to keep our personal possessions a little safer.

It's all about the smaller gadgets

Taylor told us that when he first started his life of crime antiques brought in the most cash. That’s mainly because most tech was big and awkward just a few decades ago.

“Twenty years ago, televisions aren’t what they are now," he recalled. "Carrying one of those up the street? Well, that was hard work.”

But now, as you’d expect, the cash is in technology. Especially technology that’s easy to swipe from people.

“[Thieves] have got it easier now. Cash, that’s easy to take. But obviously jewellery and all of your smaller tech too.”

Stop showing off on social media

Taylor said that identity fraud is a huge concern, especially with a lot of email scams and people hacking into accounts. But when it comes to online safety he thinks social media bragging is only going to lead to more trouble over time.

He warns people of showing off about being on holiday, being out of the house or anything else that indicates you’ll be away for a long time. Especially if you’re always tweeting about where you live and keeping your location tagged in updates.

Taylor said, “People show off too much on social media. ‘Oh look at me I’m on a beach!’.”

As tricky as it may sound to those who can’t resist a smug selfie, you really should try and #latergram everything.

Taylor continued, “Resist the urge to put up photos and show off when you come back, not when you’re there.”

Sure it sounds obvious, but in a cocktail-induced fit of social media showing off you might forget about the safety of your stuff back home as you try to get the perfect sunset selfie.

Keep things out of plain sight

Other than social media, I asked what other common mistakes people make a lot. Taylor told me, “The main reason people get robbed? That’s simple. It’s leaving windows open. Even in winter.”

He also warned us that thieves are really opportunistic. So even if you’re not leaving a window wide open, move stuff away from view of windows if anyone were to peer in.

“Leaving anything in sight. Whether it’s in sight of a window or even a letter box is asking for trouble. For example, even if there’s just a spare set of house keys or something like that, they’ll find a way.”

I asked him what he meant by “find a way”, and that’s where the multi-purpose nature of selfie sticks came up.

“People use selfie sticks now to get the stuff you’ve left in plain sight. They used to use fishing rods, but it’s a new use for selfie sticks.”

But really, he said a big part of it all comes back down to behavior and wanting to be seen to have cool stuff.

“For me, it’s all about showing off. Not just on social media. But people think their front window is a shop window. When you leave the house, you need to make sure things aren’t exposed.”

Secure the back of your house, windows and doors

A little tired of hearing about how stupid we all are collectively, I wanted to find out more about tips to keep us and our stuff safe. Taylor said it’s down to remembering painfully obvious stuff.

Just like making sure the back of your house is as secure as possible. He recommends getting fences checked, or putting up a prickly plant, trellis, or anything else that looks like it’ll make it harder to get in.

He explained that the back of your house is particularly relevant as power tools - usually left in garden sheds -  are nearly higher on a thief’s hitlist than gadgets and TVs. Apparently power tools are taken regularly, and many people don’t think to properly secure sheds and garages as much as they do their main house.

On that note, Taylor said he’s excited to see where the potential of smart locks and NFC locks take us in the future.

“Particularly security systems that make it seem like you’re away when you’re in another country," he specified.

"We’re not quite there yet, but if you could make it seem like you’re answering your door in London from Spain, there’s no better deterrent.”

Taylor told me he urges people to never underestimate the power of the mind.

“It sounds simple, but if there are five houses in a row and one has a closed gate, a sign that says ‘Beware of the dog’ and a gate and an alarm box and the rest don’t - which are you going to go for? Even if there’s no dog and the alarm isn’t real.  You wouldn’t take the risk. You’d go for the others. Psychological barriers sound too easy. But they work.”

So even if it feels a bit silly, it might be worth investing in stuff that’ll make it seem harder for opportunistic thieves. He said faking a dog is the most effective.

“Dogs are the worst thing. They’d deter anyone. They’re loud, annoying, could leave your DNA if they bite you. Get a dog!”

How does stolen stuff get sold on?

Knowing absolutely nothing about criminal syndicates, there are many routes to getting pinched items sold on once taken.

“There are all kinds of ways,” Taylor said. “But a safe way is getting to know all the pub landlords and taking stuff around, showing it off and selling it that way.”

Of course there’s the internet too. It’s becoming easier than ever to set up a quick, anonymous profile on all kinds of sites. People can sell stuff online as well if they want rid of it fast.

I was keen to find out whether he felt crime was different in different countries. He said he can only speak from personal experience and can’t make sweeping judgements, but on the whole a lot of thieves from Eastern European countries seem to be way better at pickpocketing than those from the UK.

He also said we could all learn a thing or two about home security from our German and Swiss friends, who tend to value security and have begun using more advanced locking tech systems than us.

So in summary, use your common sense. Keep things out of plain sight, sure up your security and buy a new dog. It’s for your own protection.