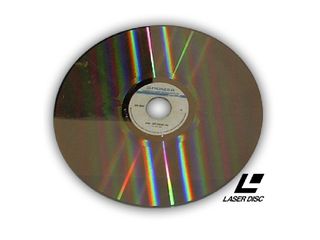 The Laserdisc - not just an overgrown CD

With Panasonic bringing back the VHS (albeit connected to a Blu-ray deck) and every AV manufacturer under the sun harping on about 3D as if it's the Second Coming, you'd be forgiven in thinking that technology today has a slightly retro feel to it.

Well, Pioneer has done nothing to discourage this thought by announcing that it is to cease production of Laserdisc players. Yes, that's right those LP-shaped movie carriers that we all thought died out around the same time DVD came into play.

In a press release, Pioneer broke the news as gently as possible to the two people who still own Laserdiscs – Peter and Sally Jenkins from Norfolk are their names – by offering a bit of insight into how the Laserdisc came to be and how it changed the AV industry:

"In 1980, Pioneer introduced its first consumer LD player (VP-1000) in the US market, followed by the Japanese market in 1981 and other markets accordingly.

"It has contributed to the audiovisual enjoyment of so many consumers all over the world."

Joking aside, Laserdisc was the AV enthusiasts' choice before DVD. Offering much the same functionality and extras as DVD – it was the first place you could find a director's commentary – helmers like Peter Jackson swore by the product as it allowed them to speak directly to their audiences.

Unfortunately, DVD with its compact look and ease-of-use won through in the end, with LD destined to reside in format hell beside Mini Disc, HD DVD and Betamax.

For those interested in purchasing one of the last LD players, then here's a list of the final models: DVL-919(DVD/LD compatible player), CLD-R5 (LD/CD player), DVK-900 (DVD/LD karaoke system), and DVL-K88 (DVD/LD compatible karaoke player).

And for those worried that their current LD player will run out of parts, you'll be pleased to know that Pioneer has promised to keep a repair service going.

Goodbye Laserdisc, now that we have been reminded of your existence, you will be sorely missed.