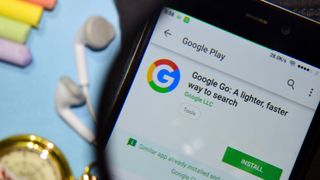 In 2017, Google launched a stripped-back version of its Android operating system for emerging markets like India and Brazil where spotty networks are a real issue. Android Go came with its own suite of lightweight apps from the tech giant, including the Google Go browser, Gmail Go for email and Gallery Go for photos, that would work seamlessly on entry-level devices.

However, Google Go is no longer restricted to emerging markets – the app is now available on the Google Play Store globally, letting more Android users take advantage of the data-saving app.

Google Go weighs in at just 7MB and uses less data and processing power than the regular Google search app, making it perfect for anyone who either doesn’t have a lot of storage on their device or doesn’t have the bandwidth to spare.

Since its launch in 2017, Google has added features to the Go app to make it more appealing to emerging markets. Last year, Google rolled out a reading feature that could recite online text aloud.

Earlier this year, the tech giant also added Google Lens functionality to the simplified version of the search app (which is what increased the size of the app from 5MB to 7MB). This feature uses a device’s camera to recognize text found anywhere in the real world, which the app then reads aloud – a feature important to anyone with reading disadvantages.

The app also supports voice, GIF and image search, and is available right now on the Play Store for users running Android 5.0 Lollipop or higher.