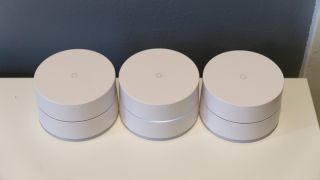 After months of Antipodean anticipation, Google has finally confirmed that its Google Wifi mesh router system, which received our Editor's Choice award, will be available to purchase Down Under from July 20, 2017.

Individual Google Wifi units will carry a price of $199, though if you're looking to really take advantage of what mesh networks have to offer, you can also opt for a three-pack priced at $499 – ideal for larger homes where one Wi-Fi might not cut it.

One unit will act as your primary Wi-Fi router, with the other two units positioned around the house to act as wireless range extenders. The mesh network can be controlled entirely using the Google Wifi app.

As with other mesh systems, each of the routers bounce their singles off of each other in an effort to give your home complete Wi-Fi coverage. If one unit drops off the network, the other two will automatically route around it to pick up the slack.

Arriving in Australia alongside Google Home, you'll be able to pick up Google Wifi, both in its Individual and three-pack iterations, from the Google Store, JB Hi-Fi, Harvey Norman, The Good Guys, and Officeworks.