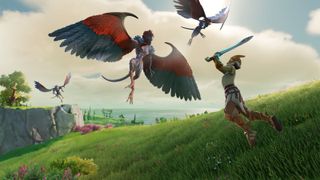 Ubisoft has announced a new role-playing game at E3 2019 called Gods and Monsters.

If you've had your fill of Assassin's Creed: Odyssey and The Legend of Zelda: Breath of the Wild, then this may fill that mythical RPG gap in your life.

Find the first trailer for Gods and Monsters embedded below. It's very much just a canned CGI reveal at this point, but it gives a good indication of what to expect from the game's style and setting:

In development from the team behind Assassin's Creed: Odyssey, it looks very much like a cross between that game and the last big Zelda adventure, tied together by the thread of classical Greek myths.

Set on the 'Island of the Blessed', you'll take on the role of a customisable central character in a large open world. You'll swing a sword, shoot a bow and arrow, use telekinetic powers and float from high spots using a bird power. You've even got a stamina meter. Yep, Ubisoft has been paying very close attention to the recent adventures of Nintendo's green-hooded hero.

And that goes right down to the art style. From flying harpies to what appears to be Mount Olympus itself, it's a beautiful, Pixar-like style.

We may not have a look at the game in action to share yet, but we do have a release date. Gods and Monsters will launch on 25 February 2020, and is set to be released on PC, PS4, Nintendo Switch and Xbox One. No word yet on Xbox Project Scarlett, but we'll keep you posted.

The game is being shown off behind closed doors at E3 2019, and some lucky guests have seen a development version of the game running on Google Stadia, so expect to see it land there, too, as well as on Ubisoft's freshly-announced UPlay Plus streaming service.