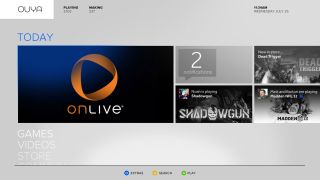 Streaming gaming giant OnLive has confirmed that it is partnering with Kickstarter console project OUYA, and will be available on the device at launch.

OUYA is billing itself as a 'new kind of video games console', attempting to create an Android-based gaming platform that is cheaper and easier to develop for.

The project has attracted huge attention from the games world, and streaming gaming service OnLive has now confirmed that it is going to be involved with the project.

OnLive's general manager in the UK Bruce Grove confirmed the move in a statement to TechRadar, praising the project's innovation:

"When OnLive first heard about OUYA, we were excited to see console gaming becoming more available and open," said Grove.

"Like OUYA, we came to gaming with a new vision for making top-quality gaming accessible to more people, and we continue to look for ways to expand on that vision.

"OUYA is rethinking the console business, making waves by using standard technology to make gaming for your living room accessible, affordable and more innovative than ever.

"In OnLive's case, we pioneered a groundbreaking, cloud-based system that instantly delivers games to any device on demand.

"We are pleased to announce that OnLive will be available on OUYA at launch, extending and building on our commitment to make the best games available to everyone, everywhere."

The statement also outlined what that means for OUYA backers – confirming that the full 'console-class' experience will be made available for play-on-demand and the games can be picked up where they are left off on other devices such as PCs, tablets, phones and Macs.

"We're pleased to deliver the same OnLive experience on the OUYA console when it launches next year."