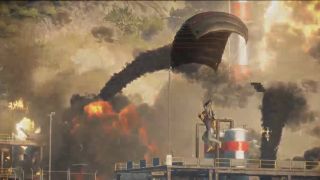 Square Enix's strange E3 2015 press conference opened up with Just Cause 3 The title, popular for mass scales of destruction, will head to PS4, Xbox One and PC on December 1, 2015.

Set in Rico Rodriguez's mother's homeland in the Mediterranean, there will be over 400 square miles for you to explore and set on fire.

In addition to the destructible environment, Rico will have a brand new wingsuit and a better grappling hook. Check out the trailer below to see both in action.