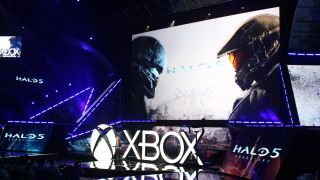 Since Halo 5 was first teased at E3 2014 we've always known the Master Chief went AWOL for some possibly Cortana related reasons but now we're finally getting a sense of how the single player campaign will go.

On stage at E3 2015, Microsoft and 343 studios revealed players will see the story unfold through the eyes of both the Master Chief and Spartan Jameson Locke, the man assigned to hunt down the Halo protagonist.

While John-117 has always been known to go it alone (albeit with some very expendable UNSC soldiers) but in Halo 5, the Master Chief will be running around with Team Blue. Locke on the other hand will have his own team of Spartans called Team Osiris.

Seamless co-op gameplay returns for those who want to play with three of their other cohorts and it seems the Prometheans will be making a return as well.

343 Studios also revealed Halo 5 will include a 24 player multiplayer mode called Warzone, in which players will face off agains AI controlled adversaries. What's more maps will be four-times the size of past maps.

Halo 5: Guardians coming out this October 17 and pre-orders begin soon.