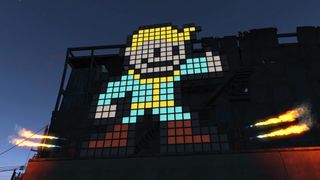 It's finally here! Fallout 4 is out and we've already sunk many hours into Bethesda's new open-world game. You can read our full verdict of the game - the good and the bad - right here.

We also have a handy guide through perks and S.P.E.C.I.A.L. stats when wandering the Wasteland. And below you can check out our tips and tricks video - you're welcome.

There are few games more anticipated than Fallout 4 right now, but it's close. Oh boy, it's close. We also know quite a lot about the game, as Bethesda has divulged plenty of footage and information already, including several videos.

Like its predecessors, Fallout 3 and Fallout New Vegas, Fallout 4 will be an open-world exploration game set in the post-apocalyptic wasteland, but with the added power of new-generation consoles. The game will be launching on the PS4, Xbox One and PC, but the Xbox 360 and PS3 won't be getting a slice of the action.

So without further ado, here's what we know so far… (oh, and here's the latest gameplay trailer).

Fallout 4 will launch on PS4, Xbox One and PC on November 10 2015, putting it in a small, exclusive community of games released the same year in which they were announced. The game is available for pre-order now, in both standard and special editions.

The special edition of the game comes with a working replica Pip-Boy which you can actually wear on your arm. The Pip-Boy houses a smartphone which displays the information on the screen, giving you that authentic wasteland-wandering feeling. The accompanying app isn't live yet, but we've already taken the Pip-Boy out for a spin – take a look.

As rumours had predicted, Fallout 4 will be primarily set in Boston, Massachusetts, though the player will explore other areas of New England, better known in the series as the Commonwealth. Interestingly, the game will actually start just before the bombs were dropped, letting you experience the events of that fatal day on October 23 2077. Your character will leave his or her home to take shelter in Vault 111, where they awake 200 years later to discover they are the sole survivor, and that they haven't aged. Why? Probably cryogenic freezing.

You'll be able to customise your character appearance, including gender, hair style and facial features. The game will also base the look of your baby based on the characteristics you choose.

Much of the plot of Fallout 4 remains shrouded in mystery but no doubt partly revolves around finding out how and why you survived for 200 years. However, don't expect to hear much more about the story before launch: Bethesda's VP of Marketing Pete Hines told IGN that there won't be many more teasers before release.

"I would be stunned if we said anything else about the story ever again [prior to launch]," he said. "We're going to let everybody experience that in game as much as possible."

The debut trailer did reveal that the protagonist will have a speaking role - a first for the series - and that you'll once again have a faithful dog companion. Before you start getting concerned - no, the dog can't die, but it can be used to maul enemies.

It's also been revealed that Dogmeat was based on an adorable real life German Shepard named River, whose owner previously worked on several Bethesda games.

During QuakeCon, Fallout 4 Game Director Todd Howard also told the audience that there will be a dozen new companions who can join your travels throughout the wasteland. We of course already knew about Dogmeat, but Mr. Handy, Preston Garvey and Piper (a companion you can meet in Diamond City) are also part of the roster.