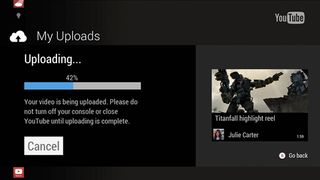 A forthcoming update to the YouTube app for Xbox One will finally allow for direct uploads of Game DVR clips to the video sharing site.

The new version, which will begin landing on consoles Tuesday, will feature a 'My Uploads' menu that will enable gamers to access their captured and edited footage.

The change comes after calls from gamers frustrated by having to use OneDrive as a middleman for YouTube uploads.

Now they can simply enter YouTube and go to work to show off their gaming prowess to the watching world.

Alongside the new upload functionality, the YouTube update also brings support for the Microsoft's snap mode, allowing users to enjoy videos while performing other tasks on the console.

Interestingly, it'll also be integrated with the OneGuide platform, meaning users will be able to add their favourite YouTube channels to sit alongside Live TV listings.

Additionally, Microsoft has announced the launch of the GoPro channel for the Xbox One.