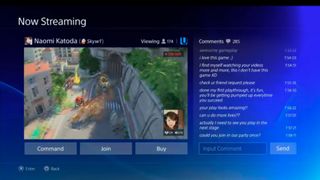 Sony just revealed the PS4 and is marching through features for the new device. Social, however, is a central part of the system, as is remote play and second screen functionality. What's potentially as enticing (for the budget-conscious, at least) is the ability to play a game before making a commitment to buy.

David Perry, CEO and co-founder of Gakai, joined the conversation to outline the potential of cloud and interactive gaming for the new system. Reports surfaced last week that Sony would take advantage of Gaikai's streaming services in the PS4, and Perry's presence cemented those reports.

Perry focused on a nice, cost-saving feature of what is a essentially a PlayStation Network and Gaikai union.

"With Gaikai and the PS Store, you'll be able to instantly experience anything you want. Try it for free, share if you like it, and pay only if you like it," he said to a full house (and millions watching online).

If you do decide to buy a game, your friends will get a notification of your purchase, tying a convenient social bow around the whole package.

Social is at the core of the PS4 experience, Perry said - Facebook and Ustream are centrally integrated into the system.

There's a share button on the PS4's specially developed controller (the DualShock 4) that can broadcast games in real time to friends, while connections can virtually look over gamers' shoulders for support or, more accurately, trash talking.

The same share button also lets gamers scan through a few minutes of gameplay, tag the video, then resume playing. Images and videos will be streamed onto social sites like Facebook for connections to cheer, jeer or reap a little inspiration from.

Ultimately, Sony envisions the PS4 predicting, loading and prepping games before a user even clicks the buy button as it culls information from their activity and the activity of the friends they interact with.

As expected, a highlight of the PS4 experience is second screen integration, which lets users flow between the PS Vita, smartphones and tablets. Remote play, at least for now, is limited to the Vita, turning it into a sort of companion device for seamless PS4 game continuation.

However, fear not traditional mobile owners: Sony has plans for an app called, creatively enough, the PlayStation App to bring the iPhone, iPad and Android tablets and smartphones into the second screen mix.

The app will allow for PS4 game purchase, watching other gamers play and viewing maps while playing an adventure game.