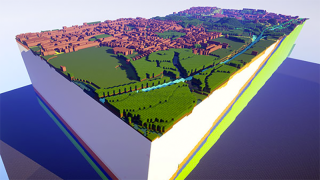 Following in the footsteps of Denmark and Antarctica, parts of the UK are being recreated in Minecraft by the British Geological Survey in an attempt to teach people about the geology beneath our feet.

Parts of West Thurrock, York and Ingleborough have been recreated in the blocky videogame using the Ordnance Survey's topographic maps and the British Geological Survey's own data about what lies beneath.

The result is six maps - three of each area with just the geology, and three with the landscape plopped on top. "When building the map of Great Britain we used blocks which best resembled the 'real' geology, based on colour, texture and hardness," wrote the British Geological Survey on its website.

"For the three dimensional models we decided to use glass blocks that were coloured by their traditional geology map colours," it adds. That's so you can see through them and get a good grasp of the extent of the different formations.

If you'd like to play around with the maps, you can go download them -- along with full instructions on how to install - on the British Geological Survey's website.