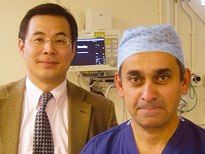 The latest futuristic medical tech - the i-Snake - a mechanical snake that enters the body through the mouth or other natural orifices in order to assist doctors with internal surgery - should be a reality within the next few years, according to experts.

While some critics point toward the current high cost of high-end robotics in medical research, a new report from Reuters points out that: "Tens of thousands of prostate, heart and other procedures are already being performed by robots, and experts predict machines will be used to penetrate deeper into ailing bodies in the years ahead."

Men requiring prostate operations are the "biggest group to go under the robotic knife at present" according to the report.

Ara Darzi is Surgeon and Co-director of the Hamlyn Center for Robotic Surgery at Imperial College London, as well as a government health minister responsible for patient care.

"It's not the easiest concept to describe to a patient," said Darzi. "Patients need to be reassured that this is not a machine operating independently. This is an enabling machine."

Darzi and his colleagues use a series of joysticks and foot controls to conduct tricky gall bladder, cancer and other operations.

"This is the tip of the iceberg - this is the first car ever invented," Darzi told Reuters.

"There is a huge amount of work in this field which will significantly enhance the ability of the surgeon to provide a much more precise, accurate procedure."

The natural orifice 'I-snake' camera and surgery system, currently in development, will be able to enter a patient anally or orally, thus doing away with the need for incisions altogether.

It is hoped that such a robotic tool will be ready for testing within the next three and a half years.

"But in future, you will see them used in more advanced procedures, like beating-heart surgery."