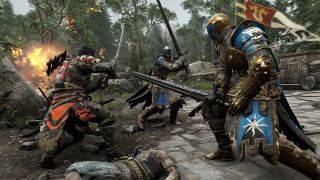 With one beta down and another on the way, the developers of For Honor are gearing up for a big launch as their multiplayer-focussed hack-and-slash prepares to go live.

But the game’s focus on fast-paced technical combat has led to some concerns that its use of peer-to-peer networking rather than dedicated servers may upset its delicate competitive balance.

In particular, people are worried that the P2P networking may give the hosting player an unfair advantage.

On this latter point, the game’s creative director, Jason Vandenberghe, is adamant that no host advantage exists.

In a recent interview with TechRadar, the developer said, “The way that our network system is built is that it’s built around everything being 100% fair. So what you’re seeing is what I’m seeing at the same time, there’s no visual advantage in the game.”

Vandenberghe says the reason for the confusion has come about because of the shortcomings of other P2P technologies (he says it’s perfectly reasonable to be scared based on the technology’s performance in the past), whereas For Honor isn’t a traditional peer-to-peer system.

The system is called ‘the simulation’, and came about due to the way the game has to handle eight simultaneous players interacting with around 200 AI characters on the map.

However, the creative director has indicated that the team is open to reassessing the technology post-launch based on how the game performs.

Rainbow Six: Siege is a game that’s cited as having done post-launch support correctly. Commenting on post-launch support, Vandenberghe says, “We’ll just see moving forward how it kind of goes into the community, and if there are actual problems, then we’ll reassess and see what we need to do.”

The game has also come under fire for featuring a locked 30fps framerate on consoles, a choice that Vandenberghe is keen to defend based on the resources available.

“I would love to be in a situation where we could be in the best of all possible worlds, but at the end of the day we needed to make sure that the game was solid, always successfully hitting its locked framerate, no drops, no nothing...and the only way we could do that was at the framerate that we’re at.”

However, players not satisfied with compromises will also be able to pick the game up on PC, where it features a completely unlocked framerate.

Ubisoft has received a lot of flack in recent years for its more controversial decisions, but it seems as though the publisher has taken these criticisms on board, and has made efforts to fix games that have had challenging launches.

From the success of its betas so far, For Honor doesn’t currently appear as though it will face the same challenges, but it’s nevertheless reassuring to see its developers so proactively planning to monitor and fix problems as they arise.