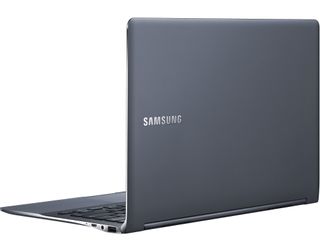 Gets some February loving

Samsung has finally announced just when its new Samsung Series 9 laptop is launching in the UK, revealing that it will be here by the end of February.

The Samsung Series 9 notebook is being touted as the slimmest laptop in the world, with a lean frame which measures just 12.9mm – or 0.5-inches in old money.

It's a laptop that has the Apple MacBook Air firmly in its sights, boasting some impressive specs including an Intel Core i5 processor, up to 4GB memory and 128GB SSD.

Samsung has also added something called Fast Start; this allows the Series 9 to wake up and be ready for work in just 1.48 seconds.

Considering it takes most of the TechRadar team three teas and a bacon sarnie, this is pretty speedy.

The Series 9 comes with 7 hours' battery life, a 180% brighter HD+ SuperBright Plus screen – which means outdoor light is no longer this laptop's Kryptonite – and the 13-inch version weighs a mere 1.16kg.

The Samsung Series 9 notebook UK release date is 25 February and will be initially available from John Lewis. It will then find its way to other retailers soon after.

If you want to see the Samsung Series 9 laptop in action, then check out our video below: