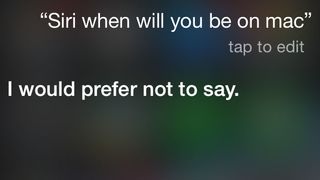 Apple has outlined the possibilities for a powerful voice enabled personal assistant like Siri to come to Mac OS X computers.

In a new patent filing entitled "Intelligent digital assistant in a desktop environment" Apple explains how voice commands could be used for search, replying to emails, setting appointments and much more.

The 92-page application, which landed at the United States Patent and Trademark Office (USPTO) this week, details how the assistant could be used to copy and paste, drag and drop files and organise folders.

Part of this could be determined by where the cursor is hovering on the Mac. For example, if the cursor was hovering over the folder, a command of "paste" would see the copied file inserted.

According to the filing, the assistant could run in the background and be accessed by a voice command, perhaps through the "Hey Siri" that's coming in iOS 8, through a specific mouse click or keyboard stroke or sit with the Mac OS X dock.

It has long been assumed that Siri would eventually make the jump to OS X although the differing functionality and complexity presented by the Mac operating system would make it a far different endeavour.

As you can tell by the photo above, Siri herself is giving nothing away.

Maybe soon, but not yet: Check out our OS X Yosemite hands-on review