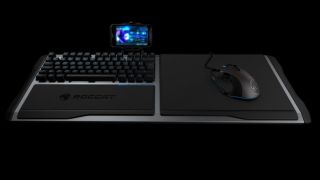 Sit back, relax and frag

Despite there being so many Steam Machines from various manufacturers, we've only seen one controller to rule them all.

Breaking with this single-controller convention, Roccat is rolling out a new Sova lapboard to bring mouse and keyboard control to Steam Machines. The hardware maker describes Sova as a solution for PC gamers who need more than a controller to play games like StarCraft II and DoTA.

Sova combines a somewhat miniature mechanical keyboard with a gigantic mouse pad. The lapboard is being billed as an extremely durable and modular accessory with a mouse pad that can be expanded and retracted.

As the name might suggest the lapboard rests on your legs with a padded underside and ergonomic palm rest to make sure the device remains comfortable to use, even after extended 15-hour gaming sessions.

Aside from connecting with Steam Machines and regular PC gaming towers, users will also be able to sync Sova to their smartphones. The keyboard integrates with Roccat's Power-Grid software, which allows for full-remote control of your PC by communicating commands from a smartphone using the keyboard as an intermediary.

Control, control, you must learn control

Although lapboards and other PC gaming accessories have tried to make keyboard and mouse easier to use from a couch before, this is the first device made specifically for Steam Machines.

There's nothing too novel about the Sova, but it goes against Valve's attempts to distill PC gaming into an accessible living room experience with its Steam Controller and Steam Boxes. The Roccat Sova could be just the first in a long series of peripherals to bring keyboard and mouse control to Steam Machines.

Roccat has yet to announce a price or release date, but stay tuned for our hands-on with the lapboard at E3 2014.