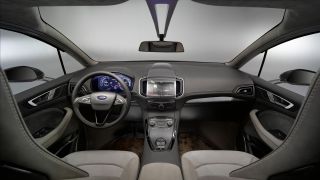 One day your car will drive you to work and back

The driverless car is still a long way from becoming a reality and even when it arrives, it won't be quite what you think or what you want it to be.

That's the opinion of Ford CEO Alan Mulally who met with TechRadar in Berlin this week.

Mulally is widely credited with having saved Ford from financial ruin when he took over as CEO seven years ago, and has been touted as a possible successor to Steve Ballmer at Microsoft.

Ballmer himself said of Mulally: "He understands the fundamentals of business success as well as any business leader I know."

Mulally is hugely excited about the prospects for the driverless car, which have been the fodder of science fiction for over 50 years.

And technological advances in the past few years have brought the idea back into the public consciousness as a viable product.

Cars get smarter every day

Ford cars already have the ability to detect danger and autonomously perform emergency stops regardless of what the driver is doing. The cars can also park themselves, and they can even listen to your commands and understand what you're saying.

But the one thing they can't do is drive you to work. And even when they do eventually gain this functionality, Mulally says you won't be able to kick back and have a nap because you never know when you'll have to take control of the wheel.

"The sensor set now and all the GPS data is getting to a place where there is a lot of capability to be able to make improvements in safety. The most important thing is that you can do that technically and you can anticipate all the different situations, but we're not quite there yet.

"We can't detect snow, for example. Or if you have a construction site and we don't know about that, it's not on your navigation. So one obstacle is technical.

"But I think a big thing is going to be affordability. These driverless vehicles that you see are $600,000, $700,000 vehicles. So this is about economics too.

Ford's new S-Max concept car includes a heart-rate monitor and the ability to track your blood sugar levels. The driver's seat gets an ECG that logs heart rates and patterns as well as picking up on any acute heart problems. It can even call for medical help and trigger the active safety systems if the worst happens and it detects a heart attack. The system can also warn a parent if a sleeping child is suffering a diabetic episode.

"Some people say, 'Well, clearly you need to keep the driver in the loop so they know what's going on.' But it's very different in a car because things happen so fast that you can't be doing something else like reading the paper or combing your hair because all of a sudden the car says 'would you please take over, we have a situation here.' We just don't have time to do that."

Mulally says the driverless car will not arrive in showrooms all of a sudden, but that it will evolve over time with features being added every year.

"You can't be doing something else like reading the paper or combing your hair because all of a sudden the car says 'would you please take over, we have a situation here'"

The neat thing about this technology is that it's going into the car now.

"It used to be only passive safety, but all this active safety that we're adding now [is] making the car safer and safer and safer. So it's not like it's going to be one big leap into the driverless future. You're seeing all that going in the car today, but who knows what the time frame is. It'll come when all those things come together."

Ford's vision for the connected car is to use driver's smartphones to take on most of the grunt work, a different approach to the one other manufacturers have taken.

"One of the things that people really loved about Ford was that when we moved to the connected world, we made the decision to use the consumer's smartphones and not build the capability into the car. You can have one integrated life, because you could bring whatever your phone was, whatever operating system it was. You have this Ford that can use all of your capability. We got a tremendous response from that.

"A lot of people have done their own system and they embedded it in the car, and then the software can't keep up with the consumer's electronics and you have to change your car out. And we want to get to a place where you can just flash your car over the internet and you have the latest software and applications. Because the car has a life cycle that is much larger than consumer electronics."

Like this? Check out: The city that's ruled by self-driving cars