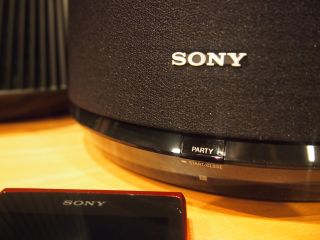 Our time with Sony in Tokyo is drawing to a close, but there was just enough time this morning for the Japanese company to show TechRadar a preview of its new wireless streaming speakers.

The multi-room audio trend, kickstarted by Sonos five years ago, has been a growing area in consumer tech. But it's taken until now for Sony to attempt to take a bite out of it.

The new line-up of speakers will be officially announced later this year, but we can reveal that it consists of three different models. They were developed especially for the European and US markets, with small Japanese homes not usually requiring multi-room audio.

The flagship speaker is the tall, spirally Sony SA-NS510, and will be joined on the shelves by the smaller SA-NS410 and mini SA-NS310. All are circular-shaped in order to delver full 360-degree sound to an entire room. Both the NS510 and NS410 offer the two 15W speakers with a down-firing subwoofer add to add lashings of creamy bass.

The service can be controlled using both iOS and Android apps, with the obligatory party mode ready and present. It's also fully AirPlay compatible which makes life for iPhone owners especially easy.

The apps themselves are impressively easy to use, with the ability to simply select each individual speaker by selecting its picture from inside the app.

The speakers can play in unison or individually, and like Sonos the apps are able to send different streams to each speaker either from your mobile device directly, from your home computer or from various cloud music services - the specifics of which Sony could not confirm to us yet.

We'd imagine that in order to compete with the likes of Sonos, cloud music services like Spotify and Deezer would need to be supported but we'll have to wait and see. Sony's own service is, of course, part of it though.

You can use all the different models together if you wish, and the existing Sony G2BNIP mini hi-fi system will also be able to join the multi-room party once the new products are released.

The NS510 has a built-in battery pack and handle so you can unplug and take it with you if you wish, with five hours playback a decent return for a speaker which sounded crisp, punchy and wholsome.

The system is also incredibly easy to set up. It utilises your existing home network, either wirelessly or using Ethernet.

If you have an app installed on your Android or iOS device, it will detect a new speaker and you can send across the encryption password for your router without even having to disconnecting your phone or tablet from the home network.

Prices for the speakers haven't been decided yet, but you can be sure that the NS510 in particular will be a pricey beast – we anticipate it costing perhaps as much as £500 – though we sincerely hope it comes in a bit cheaper than that.

There is also some doubt about which of the two smaller speakers will make its way to the UK - it's possible that the NS510 will be joined by the NS310 and not the NS410 but that's still to be decided.

We'll bring you a review of the system as soon as Sony let us snatch one away from them.

Come back to TechRadar next week for our exclusive interview with Sony's deputy president of its home entertainment group, Noriaki Negishi.