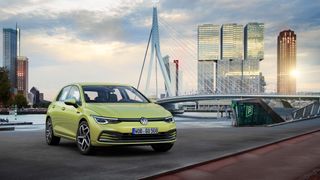 The Volkswagen Golf has been a huge hit over the years, with 35 million and counting sold so far. It’s still mighty popular with new car buyers who prefer their motoring experience to have a no-nonsense Germanic edge.

While the new eighth-generation model doesn't look that much different to earlier incarnations externally, the interior that has gained a lot more appeal if you love your in-car audio. Volkswagen has teamed up with Harman/Kardon and has developed a brand new audio system specifically for the Golf Mk 8.

What you get here is a small battalion of 10 high-performance speakers, including a 160mm subwoofer that has been packed into a 10-5 litre sealed enclosure for added bass boost. Meanwhile, the music gets pumped out via a 480-watt amplifier.

Distribution of the sound works a treat thanks to one 80mm centre speaker in the dashboard, four 25mm tweeters in the A-pillars and rear doors along with twin dual voice-coil woofers in the front doors. A further two 168mm single voice-coil woofers are also positioned in the rear doors, and music delivery gets additional help from the Fraunhofer Sonamic Panorama.

With more of us listening to music in our cars that might come from a variety of sources, such as smartphones, MP3 players or USB sticks the level of inconsistency can be annoying at best and, at worst, distracting as you try and adjust the audio quality coming from your speakers on the move.

The Fraunhofer Sonamic Panorama helps to balance out any aural inconsistencies and boost the overall dynamic range of your tunes. Add it all together and the Golf Mk 8 should deliver one of the best in-car vibes available. And, with four core sound settings: Pure, Chill Out, Live or Energy there’s something to suit all tastes.

The new audio system in the Mk 8 Golf was just one of a raft of new products unveiled at a recent Harman Behind the Sound event in Munich. And, while manufacturers are attempting to lower unwanted noise inside our cars, audio systems excepted of course which are going the other way in terms of volume, there are other areas of auto manufacturing that need to become noisier. Harman’s HALOsonic is one such solution, developed to produce sound for electric vehicles.

Audio engineers at Harman were tasked with developing a system to help improve pedestrian safety around electric and hybrid vehicles. The result is HALOsonic, which uses external Electronic Sound Synthesis (eESS) to produce sounds from speakers at the front and rear of vehicles.

Cleverly, the eESS is able to actively control the volume and characteristics of the audio signal in order to give unsuspecting pedestrians a much better idea of the vehicle speed and proximity.

The eESS works by dynamically gathering data from the electric motor in the vehicle along with controls in the car, such as the pedal position, RPM and speed. Inside the eESS controller there are two modules: a Harmonic Generator Module and a Residual Noise and Sound Models Module. The former generates engine harmonics to produce a ‘basic’ engine sound. Meanwhile, the latter module boosts that with a natural characteristic to make it that little more real. The sound is then transmitted to the front and rear speakers on the car.

While it’s slightly ironic that silent, or nearly silent vehicles are being gifted ‘noise’ the idea makes a lot of sense, particularly in light of recent EU legislation that requires EVs to have an audible alert. There’s a neat addition to the system as well, in that eESS is capable of creating custom-designed engine sounds. That means manufacturers can tweak and fine-tune the sound of their EV or hybrid vehicle so that it’s carefully suited to both the model and brand.

However, you can’t help but wonder how soon these systems will be modded by enthusiasts to make their humble little electric city hopper sound more like a supercar. And, perhaps, vice versa.

We also rather liked the slightly cheesily-named Personi-Fi, which has been developed to cater for a wide variety of musical tastes. Personi-Fi has been created so that everyone can create their own tailor-made audio setup. Using a dedicated Personi-Fi app, car owners can capture their preferred audio arrangement, complete with finely honed favourite flourishes and keep them for whenever they’re needed. That’s good news for anyone who shares a car with someone who has different a different taste in music. However, there are also real benefits for people with specific hearing needs.

Finally, and something that is a supplement to Personi-Fi, is Harman’s Virtual Venues. This is another new innovation from the audio specialist that lets you recreate the listening experience you’d get from a favourite or notable music venue. Within the app, for example, there are options to select revered locations such as Sydney Opera House, the Metropolitan Opera in New York or the Royal Opera House in London. It’s not just opera venues mind as Virtual Venues also captures the essence of smaller venues, such as jazz clubs as well as outdoor arenas.

Harman says that painstaking research and the development of new algorithms has allowed it to capture the magic of these venues around the globe. And, as a result, that magic can now be enjoyed either in your car, through smart home speakers, soundbars and even your own headphones too. Nice.