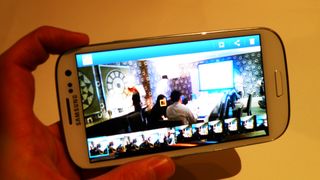 Can Apple and Samsung begin to settle their differences this week?

Samsung appears to have softened its stance ahead of court-enforced peace talks with Apple, raising hope that this week's summit could see the beginning of the end of the patent wars.

The head of Samsung Mobile JK Shin and CEO Choi Gee-sung are heading to the United States ahead of the meeting with Apple boss Tim Cook on Monday.

Shin had previously indicated he would offer "no compromise" with Apple in the battle that has seen the companies file suit against each other in nice countries around the world.

However, he told reporters on Sunday: "There is still a big gap in the patent war with Apple but we still have several negotiation options including cross-licensing."

If Apple is agreeable, it could mean the two companies could possibly reach an accord on allowing each other access to the intellectual property being debated.

However, it's difficult to see Tim Cook's charges sacrificing their long-held believe that Samsung "blatantly copied" the iPhone and iPad for its Galaxy Tab slates and Galaxy smartphones.

The respective parties are meeting following orders from a California judge, who is seemingly as bored with these two brands going at each other as the rest of the world.