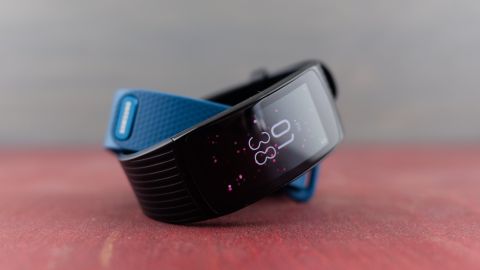 If we needed proof that the wearables market isn’t what it used to be, we can point to the fact that the greatest threat to Samsung’s new Fit 2 Pro smart fitness band is its own predecessor. With the Fit 2's lower price and equally comprehensive feature set it's hard recommend spending on this newcomer.

So what’s so “pro” about Samsung's latest fitness tracker? Not much, really. The battery is the same size. The processor, screen size and general design features haven’t changed and you’ll still be treated to built-in GPS to track your runs and walks, too.

What is different? Well the Gear Fit 2 Pro features pre-installed fitness-centric apps, such as MapMyRun, Speedo Go, UA Record and Endomondo. The main benefit being that you can get moving just a bit faster.

And Samsung has doubled-down on the original’s IP68 rating to add MIL-STD-810G certification, which means this wearable is more durable. It’s more swim-friendly, too, with the ability to withstand 5ATM of water pressure.

For most, the main draw for this wearable is that Spotify’s sought-after offline mode works here, meaning it can act as a standalone music player that pumps tunes to your wireless headphones. Indeed, this is an awesome perk.

Unfortunately, not all that has changed is for the best. In fact, many of the tweaks simply highlight longstanding issues. The pre-installed apps, for instance, seem like a time-saver given the nightmare that setting up and navigating through Samsung’s Galaxy app store is. But two things: Spotify, which offers arguably the coolest feature here, isn’t pre-installed. Second, you’ll also need to download most of these apps onto your phone to even get started. So for those hoping for a ready-to-go device out of the box, this change is meaningless.

Next is its price. The Fit 2 Pro launched at $199, that's $20 more than the original Fit 2 at launch. This doesn’t seem like an egregious price hike, but it’s dead simple to find the previous year’s Samsung Gear Fit 2 for around half the price and the Gear Fit 2 Pro’s new features, of which there are very few, aren’t worth nearly double the money.

Of course, the Gear Fit 2 Pro has now dropped in price too (more on that below), but it's still more expensive than the Gear Fit 2.

After testing out the Gear Fit 2 Pro, I’m not confident that the changes made turn this into the best choice if you’re jumping in for the first time. In fact, not only are there too few reasons to incentivize those who own the original Gear Fit 2 to upgrade, it makes the previous year’s wearable even easier to recommend because of its lower price.

Sometimes, a total overhaul just isn’t necessary. But as it turns out, a bit more of an overhaul would have gone a long way in making the Gear Fit 2 Pro worth it.

However, it has since dropped in price and you can now find it for around $130/£150, putting it roughly in line with the newer Fitbit Charge 3.

The Samsung Gear Fit 2 was – and still is – one of the best-looking fitness trackers around, and this model reiterates the same statement.

Around the front is a curved Super AMOLED that shines brighter and with far more detail than you’ll find in the average wearable. The interface is oriented vertically, meaning all of the metrics can easily be read without tweaking your head to the side, like we saw with the otherwise fantastic Microsoft Band 2.

As far as controls are concerned, the screen offers touch functionality, but its two buttons on the side control the Gear Fit 2 Pro’s main interface features: one for waking the wearable and jumping into the main app menu, and the other, which is designated as the “go back” button. To put it to sleep, simply place your hand over the screen.

The biggest physical difference here is that Samsung has introduced a standard watch strap clasp instead of a latch strap. It’s a subtle change, but a big one for those who stick with tradition. Thankfully, this strap is also compatible with the original model, though it isn’t available for purchase separately.

Flipped over on its back, this wearable rocks the same hardware, including a heart rate sensor and a few pins to charge when rested on the included USB-powered charger.

Speaking of the charger, charging the Gear Fit 2 Pro is a breeze thanks to its fail-proof magnetic charging mechanism. No matter which way you align the device, it’ll start charging without any fuss. This is how you make proprietary chargers work in the favor of the user.

Next Page Performance, fitness and verdict