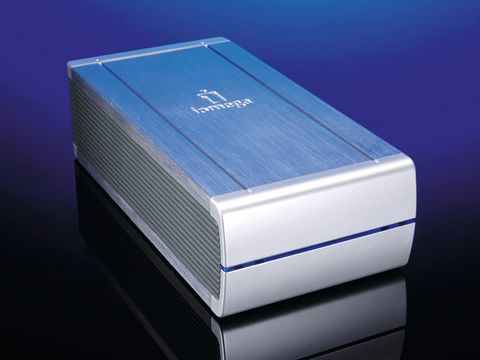 Two disks, but only half the features

The smart alloy case of this Iomega drive is noticeably bigger and heavier than most of the competition, and with good reason, too. It includes not one but two separate hard drives, along with a reasonably quiet cooling fan to keep the heat down to manageable levels.

This could actually be an advantage if the drive supported RAID, so you could create mirrored backups of your data, but as it turns out there's only a spanning mode available, so you have to use the full 1TB available as a virtual single drive. That's a little unwieldly, to say the least.

There's more bad news when it comes to the interface, because you're only provided with a standard USB2 connection rather than any FireWire or eSATA alternatives. On top of that, this the Iomega comes without any bundled back-up software, although Iomega is happy to sell this to you as an optional extra, for upwards of £50. Whether you'll be happy to take Iomega up on its offer is another matter.

Slow on the draw

It's not just the lack of features and software that makes the Iomega Desktop Hard Drive look distinctly second rate. The device is also a fair bit slower at writing data than most of its rivals.

All things considered, the Iomega is big, bulky and proved slow in our tests. With its lack of a supporting software bundle or interface options, the £160 for a 1TB drive isn't half as tempting as it might have been. Despite clever styling and excellent build quality, it's certainly not a hard drive that would benear the top of our shopping list.