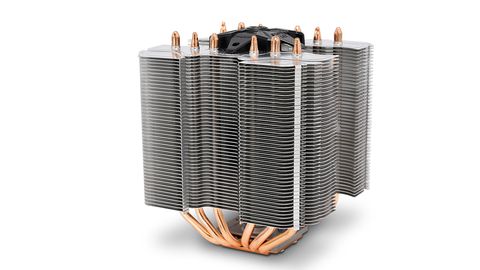 This is a serious bit of kit. Let's start with some of the highlights. Six copper heat pipes draw thermals from a polished copper cooling block and feed to two massive aluminium fin stacks. Nestled in between is a 140mm fan that draws air through one stack of fins and squirts it out via the other.

As you'd expect from a big fan, the quoted noise specs are very impressive and top out at just 21dBA. Zalman's idea with the CNPS14X, then, is good thermals combined with excellent noise levels.

If you want to tip the balance in the direction of thermals and performance, you have the option of strapping on one or two extra 140mm fans, giving mighty cooling potential, but our benchmarks show the CNPS14X with just the integrated 140mm blower.

For starters, it achieves the lowest idle temps at stock clocks of all the air coolers tested this month. Everywhere else, it shares equal top billing with the Enermax ETS-T40.

With the extra fans, this thing would be a beast. As it is, it's still very effective and awfully, awfully quiet to boot.

What it's not however is a particularly practical processor cooler. It's a pain to fit, partly thanks to the bitty design of the backing plate and clamp assembly, but also due to the size of those massive cooling stacks.

In fact, with our Asus Z77 test board, it wasn't possible to have a stick of memory in the nearest DIMM slot and fit the CNPS14X. You have been warned.

It's also something of a wallet buster by air-cooling standards.