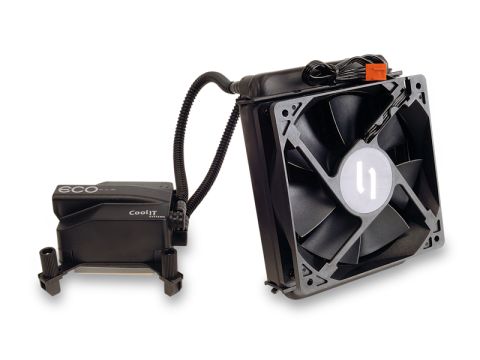 The Domino has more features for the same price, but the ECO has simplicity on its side

CoolIT's Domino ALC represented its most advanced closed-loop water-cooled CPU, but at close to £80 it was quite a pricey bit of kit to be slotting in your machine for a little extra chillin'. The Domino performed impressively, though, allowing extra overclocking headroom while still having the option of being quiet as a dead mouse.

The CoolIT Eco ALC version is a stripped-down edition, sporting only one mode and with none of the LED finery that adorned its older brother.

But to be honest it was the LED display that bugged me the most about the Domino. It was rather chunky and more often than not simply got in the way of the side of the case. And you could just forget about it if your chassis had a side-mounted fan too. Still, the actual cooling performance meant that we could easily forgive these niggles.

The Eco, however, is as simple as it is brilliant. The reservoir is the same size as the Domino's, meaning that it will sit happily on the 120mm fan mounting on the rear of your chassis, and the lack of digital readout means there's little worry of it getting in your way.

The rubber 'screws' have been replaced by actual screws, too, which makes the whole thing feel more secure. Our favourite feature, small though it is, is the way you can adjust the mountings for the Intel chipsets. The four screws have three settings for LGA 775, 1156 and 1366, making it a doddle to fit.

It also retains the Domino's excellent cooling performance. When tested on an overclocked Core i7 980X at 4.39GHz, it easily outperformed last month's pair of high-end coolers, the Tranquillo and Frio.

That said, the Frio did gain an edge when the twin fans where turned to full – but then we could hardly hear ourselves type.

The only real issue is that the Domino has now dropped in price to the point where you can pick one up for the same amount as the ECO. But if you don't have the chassis space for the LED display then the ECO makes a wise choice.