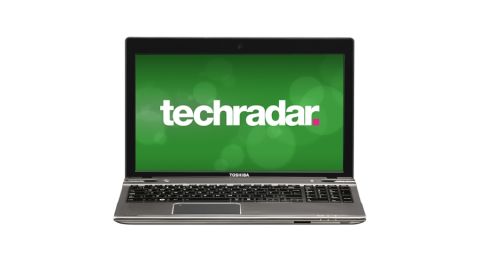 Great performance at a reasonably low price for this 15-incher

The Toshiba P855-32G is an updated version of the Toshiba P850 home entertainment laptop released earlier this year, featuring more power for the masses.

What this upgrade does is put the P855 on a competitive standing with current laptops, which are featuring powerful third-generation Ivy Bridge chips as standard.

If you didn't know about the differences under the hood, you'd think the two Toshibas were identical and, well, that wouldn't be too far from the truth.

The mid-range market for 15.6-inch laptops has been a little quiet of late, which is understandable given the intense focus on Ultrabooks and – now that Windows 8 has been launched – tablets, as well as all sorts of funky-looking convertibles and hybrids.

A regular laptop just feels a little boring these days, but that's not to say there isn't still demand for something more down to earth, such as the Samsung Series 3 or Asus K53S; and the Toshiba P855 has appeal too.

There isn't too much to shout about when it comes to the P855's aesthetics – it looks the same as its older sibling the P850, featuring a brushed-metal finish which is reasonably attractive in an industrial sort of way.

It has a full-size Chiclet keyboard with a number pad, which makes it really useable, and it looks good too - although there's no fancy backlighting as you might expect with a more premium model.

While most laptops of this type will inevitably spend most of their time at home, the occasional trip will mean the P855 will be called into action, but at an astonishing 2.66kg it really isn't suited to this type of role.

It even makes less of a case for working on the move than the similarly-priced 15-inch Medion Akoya P6635 does, which also weighs a considerable 2.5kg.

Like the Medion though, the Toshiba P855 concentrates its efforts on serving up a big dollop of performance.

Sporting a third-generation 2.5GHz Core i5-3201M, 8GB of RAM and a standalone nVidia GeForce GT 630M graphics card, the P855 is certainly no slouch, only just bettered by laptops featuring the latest Core i7 processor.

It even comes with a high-end pair of Harmon Kardon speakers, so for £650 you really do get a lot of laptop.

The only missing features that would make the P855 a powerhouse of an entertainment laptop are a full HD screen and Blu-ray drive. For £300 you can get all this – as well as a glasses-free 3D screen – on its bigger sibling: the P855-32J.