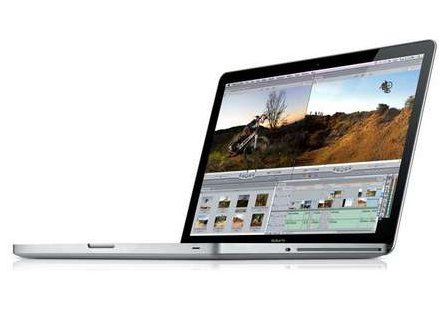 The MacBook Pro's new case is more than just good-looking; you can now upgrade the hard disk yourself, and the latch is magnetic

Finally, Apple has ditched its pretty-but-old-fashioned 5-year-old case design; plus, it's a screamer

Sure, the MacBook looks great, and the fact that there's no longer such an obvious style divide between it and the more powerful MacBook Pro models is big news, but for our money the new unibody case of the MacBook Pro marks a bigger shift between the old and new MacBook Pros than between the two MacBook generations.

Look at the evidence: until this latest MacBook Pro was launched, Apple's professional laptop line was using a design that was merely an incremental evolution of a case it introduced a full five years ago.

It was pretty, yes, but it was also surprisingly old-fashioned in the way it did some things. The case closed not with the magnetic clasp of the MacBook, but with a physical, fault-prone catch.

And unlike with the black and white MacBooks, in which removing the hard disk to upgrade or recover the data from it was a simple matter of slipping out the battery and pulling out the hard disk, the old MacBook Pros required you to open up the whole case.

Frankly, it wasn't something even we felt comfortable doing, so unless you wanted to pay a technician to fit it on your behalf, you were left with a very powerful machine toting a titchy hard disk.

Now, that has all changed. The updated MacBook Pro cases use the same design as their baby brothers; the lid closes with a satisfying soft thunk – and opens with just the perfect amount of pressure – and the hard disk can be easily upgraded simply by popping off the back panel, released by a Mac Pro-like catch.

This is important; while Apple would like to charge you £105 to upgrade the 5,400rpm 250GB hard disk in the entry-level MacBook Pro to a 7,200rpm 320GB model, you could buy one online for £55 and still have the 250GB drive that came inside the laptop to fit into an external case and use. It's easy to do, so why wouldn't you?

Like the MacBook, the RAM is limited to a total of 4GB – acceptable, but we'd like to have seen it able to take more so mobile pros can take advantage of the greater RAM ceiling 64-bit allows – but for once the difference in price between Apple and, say, Crucial's RAM to upgrade the entry-level MacBook Pro from 2 to 4GB is negligible.

Again, though, if you did it yourself, you'd have the old two 1GB chips which someone might buy from you. RAM upgrading is a little trickier, but it just involves removing the screws that hold the base plate in place.

The new case isn't just practical, though; it's also stunning. It feels rock solid – something that hasn't always been apparent when lifting previous generations one-handed – and drop-dead beautiful.

Opinion remains divided on how the black-Scrabble-tile-style keys look, but there's no denying that they feel fantastic; you might think that the spacing would take some getting used to after the joined-up keys of the previous generation, but that's not so; they keys are in the same position.

As with the older MacBook Pros and PowerBooks – and, now, the more expensive MacBook configuration – the keys glow when the ambient lighting drops. Despite some slightly distracting light bleed, don't underestimate the desirability of this feature; it's not just for suits trying to finalise some figures in first class, but also indispensable in the living room, too.

Unlike the MacBook, the Pro does include FireWire. Don't get too excited, though; there's only one port, and it's FireWire 800. While we love FireWire 800's speed, FireWire 400 is still much more widespread.

You can get adaptors and cables that go from FireWire 800 to the standard 6-pin FireWire 400 or even the 4-pin DV camera ports, but that means buying more stuff.

The Pro does also have an ExpressCard/34 slot, which is handy not only for peripherals such as 3G data cards, but can, thanks to the efforts of third parties, also be used to provide the memory card slots that Apple steadfastly refuses to include.

And like the MacBook, the left-hand side (why the left, Apple, why the left?) that houses the ports also includes a battery meter. While it's nice to be able to see the charge level without squinting at the bottom of the laptop, on-the-road pros will miss the ability to press a button on the base of multiple batteries to check how much charge they have.

Given that the MacBook Pro has essentially the same case as the MacBook, it comes as no surprise to learn that it too has worse WiFi performance than the all-plastic, previous-generation MacBook. It's acceptable, nothing more.

One subtle difference between the two models, however, is that while the screens look similar – and be careful with them because any damage to the bezel means replacing the entire unit; the screen and bezel are a single fused unit – the MacBook Pro's display is much more capable.

Not only are colours richer and punchier on the Pro, but viewing angles are much more forgiving too; move much off the perpendicular and the MacBook's colours start to shift, something the Pro is much less guilty of.

The big difference between the MacBook and the MacBook Pro, however, is that the Pro has not one but two graphics cards.

The buzz in the industry has been about better leveraging the phenomenal parallel processing power of today's graphics cards – something the next version of the Mac operating system, Snow Leopard, is set to capitalise on – so the new MacBook Pro is ideally placed to take advantage of future developments here.

For now, though, the idea is that you can use the 256MB NVIDIA GeForce 9400M integrated graphics chipset – the same one that the MacBook uses – when you're on the move to conserve battery power, and switch to the more powerful discrete graphics card, a (not quite cutting-edge) 512MB GeForce 9600M GT when you want ultimate performance.

Unfortunately, you can't use the two together in an SLI configuration, and nor can you switch between then on the fly; you have to log out and then back in again to effect the switch. Pray that Apple releases an update that fixes this.

Even the integrated graphics card is a decent performer, though, unsurprisingly matching the MacBook's frame rate in our Doom 3 test. Switching to the 9600M GT, though, more than doubled the frame rate to 104fps, and it even managed an astonishing 50fps at 1,600x1,200 pixels with all the settings maxed out.

The screen is bigger and better, the graphics more accomplished and the connectivity options more fleshed-out. There's a strong argument that says that the MacBook is such an accomplished laptop these days – and is now finished in so similar a way to the MacBook Pro – that nobody needs the extra bells and whistles of the pricier line.

The difference in price between the low-end MacBook Pro and the high-end MacBook (the two with the same 2.4GHz CPU) is only £250, however, and we should see Snow Leopard do impressive things with the dual GPU when it comes.

The MacBook Pro remains a more future-proof design, and if you rely on any FireWire peripherals, it's your only choice if you're in the market for a new laptop.

Both 15.4-in MacBook Pros have both an integrated graphics card – great for preserving battery power when you're on the move – and a powerful GeForce 9600M GT that doubles games' frame rate when you want stellar performance. You have to switch between them manually, however, and it requires a log-out and -in again.

It may not sound like much, but the abandoning of the phyisical latch that held the previous MacBook Pro and PowerBooks shut is a godsend. We've lost count of the number of times we've heard of people whose latches have failed, and you'd be amazed at the complexity of the repair process. The soft thunk as it closes is music to our ears!

Yes, your only option is glossy, and yes, you can sometimes see distracting reflections in it, but frankly we're fine with that. Colours are rich and vibrant, and unlike with the cheaper MacBook line, the colours remain pretty consistent as you move around the screen. Be careful, though; any damage to the fused case/screen unit could be pricey.