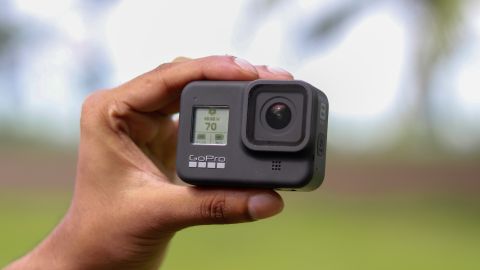 The generational improvement in image quality across the board brings it significantly close to modern smartphones. Of course, the detail/sharpness in the images won’t be retained when you zoom in, primarily because of the field-of-view. It gets further amplified in low-light scenarios. However, the results are vastly better than Hero 7’s, especially in aspects such as image processing and HDR.

You’ll be hard-pressed to find better handheld video stabilization on any other camera or smartphone, especially without a significant crop. The ability to shoot in slow-motion brings an almost gimbal-like look. Having said that, be sure to use it tastefully, because the shakes and jerks are a part of the adventure, can over-stabilization often take the feeling away. Switching to lower resolutions and better lighting will help retain the image integrity. HyperSmooth 2.0 “Boost” is magical, and near-impossible to fail. If we were to explain the look while trying to add shakes ourselves, it would be like the footage out of an FPV drone.

There's also a nice “Time Warp 2.0” mode, which makes speed ramping a child’s play. Just start shooting, hit the “slow” when you need and that’s it, you have your very own cinematic clip that alternates between time-lapse and slow motion. It would previously have to be done in post with a lot of effort and going back and forth.

Overall, we were pretty impressed with the video quality out of this little camera, and improvements were very evident in many areas. The multiple-mic audio capture adds a layer of immersion that is not very common to action sequences.

We're not saying that getting a GoPro will render your DSLR redundant. But it complements your rest of the kit and can go in places that would be too risky for your other cameras.

Sure, the upgrades over its predecessor aren’t too significant, but collectively, the entire package makes the GoPro Hero8 a formidable action camera that has something to offer for every kind of use. The addition of RAW image capture, full manual controls, in-built live streaming brings it closer to modern smartphones, while the mods help it go beyond.

For many users, even the last-gen Hero 7 will suffice as it has most of the same shooting capabilities and can be a great entry point in the GoPro ecosystem.

However, as close to perfect the GoPro Hero8 may seem, there are a few things we wish to see in the next version. General improvements in photo and video quality should be matched with better low-light shooting. HDR video capture will be a great bonus, too, for users who want to get the most out of their clips. Some smart in-built tracking capabilities in case of an accident will also bring a lot of peace of mind.