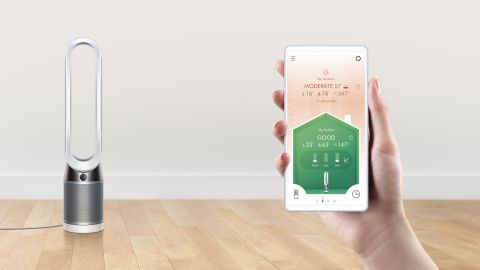 When we reviewed the previous version of this device, we asked how much would one be willing to pay for clean air. That question remains still, but the new Dyson Pure Cool has some nifty updates meant for the regular customer.

If you ventured over here looking for a cheap aim purifier then stop reading.

A company that has often been criticised for its pricing, Dyson is in no hurry to change that. The company wants to remain a premium product make that is bought for its technological prowess over affordability. Simply put, Dyson believes it produces the best air purifiers out there and they’re well worth the price. And while its newest product may look like a minor update to its predecessor, this could be one that Dyson really needed for an as-yet-unconvinced Indian audience.

The most obvious, and important change here is the addition of a screen on the purifier’s body. This can show you ten different readings, including AQI, VOCs, NO2, temperature and more. But the task of the screen is twofold here.

First, looking at the AQI readings change in real time can have a placebo effect on those who’re not quite convinced that air purifiers are of any use to them. But more importantly, I think it’s an advertisement for the new sensors Dyson has used in this device. According to the company, these are significantly more sensitive to changes in air particles than the earlier versions. In fact, Dyson has a demo it really likes to show, where it tears a sheet of paper in the vicinity of the purifier and it roars into action.

But while it does kick into high gear, the new Cool Link is also designed to be as silent as it can.  So, if you’re watching television or even conversing, you tend to ignore the low hum of the purifier. On the one hand that’s really good, but it also can feel like the purifier isn’t really doing anything. Which is what the screen helps with, showing a continuously changing AQI graph that keeps jumping between green, yellow and red, based on the conditions.

In about a week’s usage, I’ve routinely spied the purifier kicking into a higher gear when someone cooks in my house, or the maid starts cleaning in the adjacent room, or even when the air conditioner is first started.

Other than its screen and sensors, the new Cool Link can revolve a full 350 degrees (the earlier one did 180 only), throwing air in all directions. You can toggle this setting using the remote or the Dyson Link app, between 0, 45, 180 and 350 degrees. In future, the app will also allow a custom setting with which you can tell the purifier to rotate at any angle between zero and 350.

Next, the purifier now has a unibody design. So, the top half, which circulates the air can’t be detached from the cylindrical bottom half that holds the filters, screen etc. The Cool Link has a carbon filter and a HEPA filter inside, while the fan design has also been changed. While Dyson’s purifiers don’t use traditional fans, the company’s air multiplier technology continues, albeit with important changes.

For one, the purifier can now blow air both towards you and away from you, which makes it easier to use during winters. There are slits on the front and along the sides of the loop, which are the primary outlets for clean air. All this allows the purifier to maintain high clean air delivery rates (CADR), while also making sure that the purifier never makes your surroundings uncomfortable. The new Cool Link has a “diffuse mode” that tells the purifier to throw air out the slits on its sides, but without hurting its overall performance.

In terms of performance, the Dyson Pure Cool doesn’t show much tangible difference. The HEPA and carbon filters both cover 360 degrees now, but as with any purifier, you can’t ‘see’ the difference this makes. However, the fact that the new sensors are more powerful is not tough to discern.

The purifier kicks into high gear almost as soon as someone starts cooking in your home or smoking and so on. As with the earlier version, there’s still a sensor lag (time taken for the sensors to measure air quality, send the data to Dyson’s data centres and act accordingly), but the changes happen much faster now. If you light a set of matches in the room, the PM2.5 levels will go up and the new purifier reacts to this faster than its predecessor, even if only slightly.

The new Pure Cool is also being launched at an opportune time since Delhi’s air quality has been much better because of the monsoons. The earlier version of this did a great job but it never could bring the in-room air quality down to WHO-certified levels. This time around, the AQI levels are under breathable norms and the in-room air quality stays in the green more often. That doesn’t mean the new Pure Cool doesn’t work, but it’s yet to be tested when Delhi is at its worst. Also, Dyson very openly agrees that its technology, though effective, hasn’t bested extreme pollution levels like Delhi just yet.

Setting up and the Dyson Link app

The setup process remains quite the same. You push the filters into place at the bottom of the purifier and cover it up. The remote is paired by simply placing it atop the purifier and it’s all ready to go. The whole process takes 15 minutes tops and you can connect to WiFi using the Dyson Link app. Dyson provides a huge power brick with the device, which is quite inconvenient, because it takes a lot of space on the switch board or extension board you use.

The Dyson Link app looks a little different with this purifier too. The home screen shows separate meters for PM10, VOCs and NO2. You can also check graphical representations of AQI over time here. The remote reflects the physical remote, adding all of its functions, including the diffuse mode and different rotation controls. The company will be sending an update in future that adds the custom rotation control as well.

And finally, the Dyson Pure Cool does support Amazon’s Echo devices, but that’s not available in India just yet.

Dyson’s products are expensive, period. And the company has no intentions to make them cheaper. The company says in using premium and best-in-class materials to craft its technologies, it has to incur higher costs, and hence must raise prices.

Not many will be able to afford this air purifier but all the changes Dyson has made are meant for the mainstream. The screen allows a sense of solace in the purifier’s worthiness, while the sensors, 350-degree rotation and diffuse mode are things many buyers have asked for - it will make them feel that they are getting their money's worth. So, this might be the first product that premium air purifier buyers in India might actually consider.