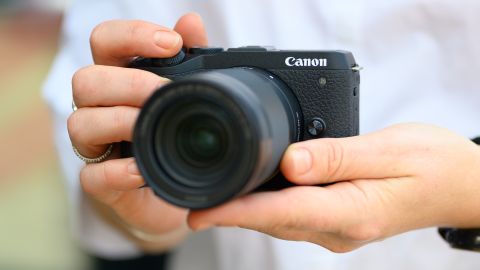 There’s a lot to like about the Canon EOS M6 Mark II. Its small size and low weight make it the ideal traveling companion, without compromising on specs and features, and a super-high resolution APS-C sensor, 14fps shooting and uncropped 4K add up to one tasty package. We have a few reservations, but overall it’s a fantastic camera that's well worthy of consideration.

Launched at the same time as the Canon EOS 90D DSLR, the EOS M6 Mark II is not only an evolution of the previous M6; in some respects it's a miniature 90D, as the two cameras share the same sensor.

Canon’s M range of mirrorless APS-C cameras have been playing second-fiddle to its full-frame options lately, and while some of Canon’s M-series models are underrated, decent performers, the original M6 arguably wasn't the easiest to fall in love with.

The EOS M6 Mark II represents a fairly dramatic overhaul of that camera. Canon's decision to place a high-resolution sensor inside a miniature body along with a range of impressive action-friendly specifications is a fairly bold move for a model which might otherwise only appeal to travel photographers.

The M6 Mark II isn't only replacing the M6, but also, apparently, the EOS M5. Unlike the M6 the M5 came with a viewfinder, and you can purchase a detachable OLED viewfinder either separately, or as part of a kit package if that's a feature you like to have.

The sensor in the EOS M6 Mark II gets a dramatic boost in resolution over the one in the M6, packing more pixels than ever before on a Canon APS-C sensor. To go with it, there’s the latest Digic 8 processing engine, which gives the M6 Mark II an impressive speed boost over the M5 and the M6 – specifically 14fps shooting with continuous autofocus at full resolution. A 30fps raw burst mode is also available, if you can live with 'just' 18 megapixels.

Another welcome improvement is the addition of uncropped 4K video recording, and this, along with its tilting screen, microphone socket and small size, could make the M6 Mark II an interesting choice for vloggers.

Autofocus wise, we’ve got some new functionality in the form of eye-detection, which we've seen previously on Canon's EOS R and EOS RP full-frame mirrorless models – although don’t expect to use it for more than one subject.

When it comes to design, Canon has essentially refined what it already had. It’s ditched the exposure compensation dial on the top plate to equip the camera with a Dial Func control which can be switched up to control a variety of settings.

Next Page Build, handling and autofocus