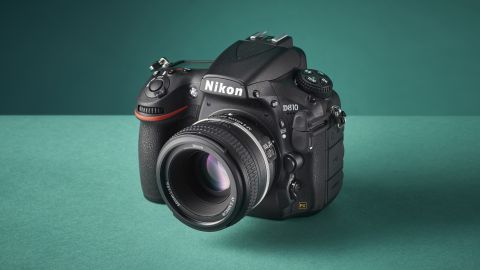 Nikon says that the D810 produces the best image quality of any DSLR in its history and we can't wait to put that claim to the test.

New: The Nikon D810 has been a firm favorite among both enthusiast and professional photographers since its launch, but has now been replaced by the brilliant D850. The D810 is still a very well-rounded full-frame DSLR and will now be better value than ever, but if you want the best, go for the D850 - you won't regret it.

Nikon's D800 and D800E caused great excitement when they were first announced in February 2012 largely because of their groundbreaking 36 million pixel count. These two full-frame DSLR cameras are identical apart from the fact that the D800E's sensor has a weaker anti-aliasing (AA) or optical low-pass filter (OLPF) to enable it to deliver sharper details straight from the camera.

Thanks to their impressive detail resolution the two cameras quickly went to the top of the wish list for many professional and enthusiast photographers, especially those looking for a comparatively lightweight camera for landscape, still life or macro photography. They have remained firm favourites ever since, setting the bar for resolution by which other cameras are judged.

Now the replacement for these two cameras has been announced in the form of the 36.3MP Nikon D810, one camera without an anti-aliasing filter to replace both models. Interestingly, we have been told that while the D800E was widely reported as having no AA filter, the filter over the sensor did actually have some anti-aliasing effect, and this has now been completely removed from the D810's filter.

This should enable the new camera to record even more detail than before, and Nikon is claiming that the Nikon D810 produces 'the highest image quality in Nikon's history'. Omitting the AA filter brings increased risk of moire patterning in images, but it hasn't been found to be a major issue for D800E users.

Given the high pixel count of the Nikon D800 it's no surprise that the Nikon D810 has the same number, but we are told that it uses a newly designed sensor, which usually means improved noise control. It has also been coupled with Nikon's EXPEED 4 processing engine instead of the EXPEED 3 engine of the D800 and this too should be good news for image quality.

Other changes from the D800 include a higher resolution LCD screen, the ability to record smaller raw images as seen with the Nikon D4S and the introduction of Group-area AF mode, also seen in the D4S. The move to the EXPEED 4 processing engine also enables an increase in the maximum continuous shooting rate at full resolution to 5fps, this was previously 4fps. Alternatively, the D810 can shoot at 7fps in DX format and record 15.3Mp images.

The D810's buffer capacity has also improved and it can shoot more raw files than the D800 in a single burst. For example it can shoot 47 lossless compressed 12-bit raw files rather than 21, and 23 uncompressed 14-bit raw files instead of 16. This is a significant step forward in making the D810 more of an all-rounder, but you have to be prepared for the memory cards to fill up quickly.

The maximum number of JPEG images that can be recorded in a single burst remains the same, at 100 whatever the file size or quality. That's unless exposures longer than four seconds are used, when the burst depth is only limited by card capacity.

Sensitivity may be set in the native range ISO 64-12,800 and there expansion settings stretching from ISO 32 to ISO 51,200, giving greater scope for shooting at wide apertures or in bright conditions as well as better low-light capability.

In addition, the D810's video capability improves on the D800's with the ability to shoot at 50 and 60p and a Zebra display mode that shows areas close to burning out. There's also a new Flat Picture Control mode that has reduced sharpening and contrast to maximise dynamic range for better post-capture grading. This new Picture Control mode is also available when shooting stills.

In another change to the Picture Control options it's now possible to adjust image clarity or micro contrast to give an impression of greater (or reduced) sharpness without over-emphasising strong edges.

Video (and stills) may be shot in FX or DX format and there's a clean HDMI out, plus the ability to capture full-resolution footage in-camera and on an external recorder simultaneously. When shooting video in manual mode, sensitivity can be set from ISO 64 to ISO 51200 while the Auto ISO function allows you to specify the maximum sensitivity setting to be used. This is especially useful when combined with the ability to use power aperture and set the two buttons next to the lens mount on the front of the camera (marked Fn and Pv) to open up or close down aperture. It should also ensure steadier footage with less operation noise.

Further video-centric improvements include greater control over audio recording to allow the user to select the sound range (wide/voice) and for wind noise to be reduced when recording with the built-in microphone. Audio levels can be fine-tuned in isolation before and during recording.

Like the D4S, the D810 has Nikon's 51-point Multi-CAM 3500FX AF system which adds Group-area AF mode to the usual options (9-,21- and 51-point dynamic-area AF and 3D-tracking). Group-area AF mode is designed to help when shooting subjects that are comparatively small and close to a high-contrast or distracting background. When it's activated the user selects an AF point and the camera uses it and the ones immediately above, below, left and right to keep the subject sharp.

Nikon has given the D810 a new shutter/mirror box mechanism that is claimed to reduce vibration giving a steadier viewfinder image with less blackout for better autofocusing and sharper images. Internal vibrations can be further reduced by a new electronic front-curtain shutter that can be used in Mirror lock-up or Exposure delay mode. Both of these points should enable users to get greater benefit from the camera's potential resolving power.

Like the Nikon D4S, the Nikon D810 can record smaller sized uncompressed 12-bit raw files. This is of particular interest to animators and those producing timelapse sequences who want the quality and control of raw files without the huge file sizes of a 36MP image.

While the size of the D810's screen remains the same as the D800's at 3.2-inches, its resolution has been boosted to 1,229,000-dots (the D800 has 921,000 dots) and the colour balance and brightness can be tuned to the photographer's preference or the shooting conditions.

In a first for a Nikon SLR, there's a new Live View split-screen zoom mode that allows photographers to check sharpness in two areas at the same time. This is especially useful when shooting landscape and macro scenes when depth of field is very important. Helpfully, you can see the impact of changing aperture as it is adjusted.

It's a shame that Nikon hasn't included Wi-Fi connectivity in the D810, instead users wishing to transfer images wirelessly have to use the optional UT-1 Data Transmitter together with the WT-5 Wireless Transmitter.